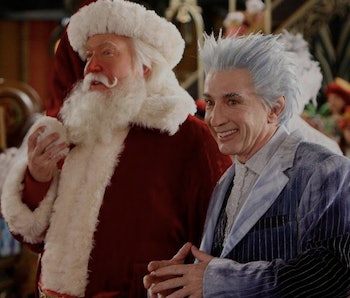 Every month, in addition to its original films and TV series, Netflix also brings a few insane movies lost to time and makes them extremely easy to watch. And December 2017 is no exception because the Netflix line up includes easily the weirdest time travel movie ever created: The Santa Clause 3: The Escape Clause.

I first saw The Santa Clause 3 on a bus in the summer of 2007, which was about a year after it was released in the winter of 2006. It was a double feature Bolt Bus was offering to kill the time between Los Angeles and Phoenix. The movie that preceded Santa Clause 3 was Live Free or Die Hard, another sequel in a beloved Christmas franchise. Of the two, I liked Santa Clause 3 way more. In fact, with the obvious exception of It’s a Wonderful Life, it’s probably the best Christmas movie ever made that happens to deal with alternate realities, and the perils of rewriting history.

Spoiling the premise of the movie will not spoil the movie, no more than knowing Santa is your parents ruins Christmas. Here’s what you need to know: Tim Allen is the incumbent Santa Claus, because in the first The Santa Clause film he took over for the old Santa after accidentally knocking him off his roof. This would be like if a new series of Batman movies were made in which Owen Wilson accidentally runs over Batman and has to take his place to keep the tradition going. Sounds better than Justice League, but I digress.

By the time of Santa Clause 3, we discover there’s a kind of Justice Leauge compromised children’s bedtime stories. You’ve got the Tooth Fairy, the Easter Bunny, Mother Nature, Father Time, and the Sandman, notably played by Michael Dorn, AKA Mr. Worf from *Star Trek: The Next Generation.

If this set-up sounds familiar, it should, because the excellent animated film, 2012’s Rise of the Guardians did the same thing, only in that version Jack Frost was voiced by Chris Pine and Santa was a sword-wielding Russian played by Alec Baldwin. Rise of the Guardians is a better movie than Santa Clause 3, but because it came out after Santa Clause 3, and featured Jack Frost as the main character, and stunt-casting from a Star Trek actor, I think we all know it was ripping-off Santa Clause 3.

In Santa Clause 3, Jack Frost is played by Martin Short, sort of re-entering his Father of the Bride 2 quality of movie-making. Jack Frost is hell-bent on time-traveling back to the moment when Tim Allen became Santa Claus and inserting himself as Santa in Tim Allen’s place. This ploy is the titular “escape clause.” Tim Allen from the past opts out of becoming Santa, and a hellscape alternate reality is created in which Martin Short’s Jack Frost rules over everything as an evil Santa.

Is this film scarier than the 2015 holiday horror flick Krampus, about an evil demon-version of Santa? Answer: yes. All you have to do is reread the paragraph above and let it sink in. The Santa Clause 3 posits that there is an alternate dimension that is somehow worse than one in which Tim Allen is the incumbent Santa Claus. And, as with any time-travel drama in which history has to be “reset,” the story gets less interesting as the “good guys” try to restore things to the “correct timeline.” Basically, you sort of don’t want Tim Allen to succeed, which is kind of what makes the movie great.

Because even though Martin Short darkening the legacy of Santa Claus is supposed to be a bad thing, it’s the best thing to happen to the genre of Christmas movies in a very, very long time.

The Santa Clause 3: The Escape Clause will be available to stream on Netflix starting on December 12, 2017.