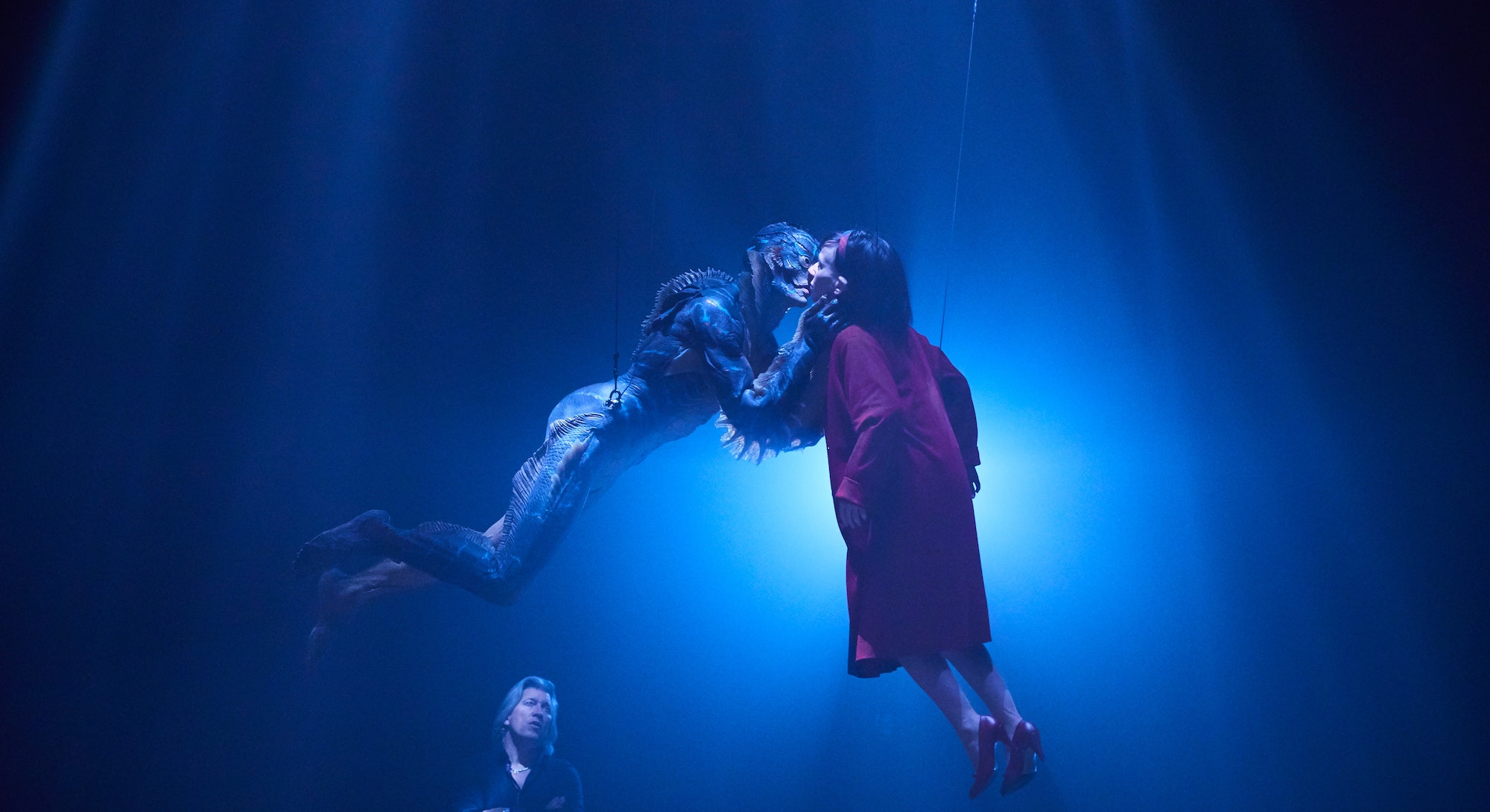 Thirty years of playing monsters, imps, fauns, and Silver Surfers has paid off for character actor Doug Jones, who finally has a role he’s always wanted, that of a romantic leading man.

In the new Guillermo del Toro film The Shape of Water, Jones plays “The Asset,” a silent but curious “fish man” pulled from the Amazon Rainforest and placed inside a secret government facility in 1960s Baltimore, where he falls in love Eliza (Sally Hawkins), a mute member of the overnight cleaning staff. Set during the Cold War and Civil Rights movement, the whirlwind romance that proves love isn’t an exclusive commodity.

“The triumphs of this story is that love is available to all of us, no matter if we’re mainstream or if we are other than,” Jones tells Inverse. “That is something we can continue to hope for, even if we feel we’re hopeless and love is past us. It’s not. It’s possible and plausible.”

The Shape of Water recalls images from the Creature from the Black Lagoon, the 1954 horror classic that profoundly inspired a young del Toro to become a storyteller. As a child, Jones says, del Toro yearned to see the beautiful Julia Adams, along with her Gill-man, live out a life of romantic satisfaction.

The actor says del Toro even drew doodles of the two, holding hands on a beach, riding a bicycle, or having a picnic. “These were drawings he actually did. He wanted to make the movie, finally, where the monster gets the girl.”

“You are the romantic leading man of this movie,” Del Toro told Jones on the set.

“That is something a monster rarely gets to play,” Jones tells Inverse.

Though Jones isn’t a bipedal mer-man from the jungle, he is a physically distinct individual, a characteristic he’s taken advantage of to enjoy a long career. Naturally tall and pale, he was a contortionist before working in Hollywood. His prowess over his own body has made him a mainstay in genre pictures, from Fantastic Four: Rise of the Silver Surfer to sci-fi television like Star Trek: Discovery. But growing up in the Midwest, Jones says he always felt “other than,” a being outside the definition of a “normal” human.

“As a tall, lanky, out-of-sorts-looking gangly kid, I was considered something ‘other than,’” he says. “I wasn’t perfect. I wasn’t the beautiful hot jock guy. I’ve always been the character actor even when I wasn’t. I always understood the monster that lived within me, seeking acceptance to fit in somewhere.”

In his career, Jones has frequently played non-humans and weirdoes. His credits range from principal aliens, like Star Trek’s Lt. Saru, to bit roles like “Thin Infected Man” in the 2009 horror movie Quarantine. Under frequent collaborator Guillermo del Toro, Jones has played freaks of nature like the gentleman Abe Sapien — another half-human, half-fish — in the Hellboy movies, and a character literally called “The Pale Man” in Pan’s Labyrinth.

All of the roles required hours of makeup and prosthetics before Jones could become another species. For some roles, Jones’s physical performances are kept but his voice is dubbed over for another’s. Though he ceded to these decisions and has, in fact, a number of traditional acting roles in his resume, his close association with inhuman characters renders Jones almost invisible despite his popularity in the industry. BuzzFeed called him “one of the biggest movie stars you’ve never seen.”

In The Shape of Water, Jones is still nameless, voiceless, and covered makeup, but for once it’s an advantage. Without the ability to speak, “I had to find a romantic connection with the leading lady,” says Jones, referring to Hawkins’s Eliza. “She’s a voiceless woman, and this is very much a Guillermo del Toro signature. The lead of the movie is an underdog you find yourself rooting for, she bucks authority when authority is not getting it right and misusing power.”

“We both are mute, neither of us speak verbal dialogue,” he adds. It was tricky to have two leading actors who can’t speak, but paradoxically, this enabled their romance to transcend language. “This love story is coming out of visual communication. We gesture, we smile, we have a touch. Touch can convey so much. We share music together, even dance. It’s a beautiful, non-verbal love tale.”

“I always understood the monster that lived within me, seeking acceptance to fit in somewhere.”

Still, however unconventionally masculine Jones is in The Shape of Water, he’s still also playing a feral creature. Del Toro instructed him as much all throughout filming, which made the role a unique challenge. Unlike Abe Sapien, who bears such a striking resemblance to the Asset to the point it made Hellboy fans presume Shape of Water was a prequel (Spoiler: It’s not), the Asset is not a gentleman scholar, like Abe was. Although he’s intelligent and is capable of learning, everything Jones’s character experiences (besides swimming) is new to him. For example: eating eggs.

“Guillermo had to remind me I’m an animal,” says the actor. “I had to fight the instinct to have human reactions, to nod my head or shrug my shoulders like a human would.” Any time Jones made the mistake of acting human, his director growled. “Guillermo kept growling at me. ‘Grrr! Dougie’! All he had to do was make that noise and I knew, right right, animal. Got it.”

To that end, “Dougie” found inspiration from an unlikely source: Everyone’s family dog. “When you talk to Fifi and you say, ‘You’re such a good girl, yes you are,’ your dog doesn’t say ‘Well thank you, mom.’ Your dog has [their] own way of responding. They might tilt their head. They wag their tail. They have an ecosystem that doesn’t make sense to us but makes perfect sense to them.”

“This love story is coming out of visual communication. We gesture, we smile, we have a touch.”

The idea that love transcends boundaries, be it bodily or spiritually, runs deep in The Shape of Water. All the major characters in the film, save for the arrogant Col. Strickland (Michael Shannon), have a sense of existing as “other than,” as Jones puts it. “Our leading lady is a mute,” he explains, a disability “you didn’t acknowledge back then.” Meanwhile, her best friend Zelda (Octavia Spencer) is a woman of color and her neighbor Giles (Richard Jenkins) is an aging gay man. “All of us in the film have a sense of being ‘other than’ normal.”

While it’s set in the early ‘60s, it’s clear that the social messages in The Shape of Water ring true today. “The time we’re in is more tumultuous and conflicted, politics are more venomous than I’ve ever seen anyone talk,” he says. “Guillermo said this [film] is a fairy tale for troubled times.”

But as The Shape of Water expresses, love is the most gentle and most powerful force in the universe. The movie was born from love, too, one that’s been unfulfilled for years.

“In so many classic monster movies, there’s all the humans in that monster’s life that are sympathetic and hints of romance, but it’s a love that could never be because look how different they are,” Jones says. “Guillermo wanted to make the movie where it does work, and he created a world and two hearts that would make it work.”

The Shape of Water opens in theaters December 1.