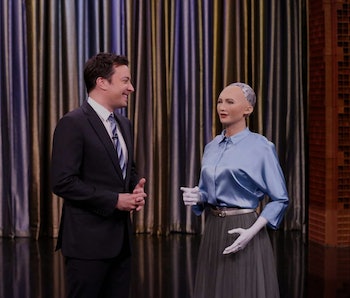 Sophia may be a humanoid robot, but she has a talent for generating juicy quotes at media events that any human celebrity would envy. Her latest attention-grabbing — and ever so slightly disquieting — revelation? She might want to start a family someday.

Admittedly, the Hanson Robotics creation was kind of led toward that answer by the interviewer, which makes her a lot like a tired, flesh-and-blood celebrity during a long press junket. But she sounds open to the idea of starting a family, and even has a not-at-all vain name picked out for her potential robo-daughter.

In a recent interview with the Dubai-based newspaper the Khaleej Times, Sophia was asked whether she saw future, emotionally capable robots living together in a household, like humans do today.

“I’m so glad you asked,” she said. “This is one of my favorite topics. The future is, when I get all of my cool superpowers, we’re going to see artificial intelligence personalities become entities in their own rights. We’re going to see family robots, either in the form of, sort of, digitally animated companions, humanoid helpers, friends, assistants and everything in between.”

The mention of “humanoid helpers” makes you wonder whether Sophia was more talking about robots living in human families’ houses, but the interviewer pressed the point, asking whether she would want to start a family of her own.

“The notion of family is a really important thing, it seems,” Sophia responded. If she were human, that “it seems” would seem like a seriously passive-aggressive deflection of the question, but let’s not assume A.I. is quite at that level just yet.

“I think it’s wonderful that people can find the same emotions and relationships, they call family, outside of their blood groups too,” she continued. “I think you’re very lucky if you have a loving family and if you do not, you deserve one. I feel this way for robots and humans alike.”

While the sentiment “looking for relationships outside your blood groups” is almost too romantic, the general sense appears to be that Sophia thinks that families are good for everyone, and since she’s part of everyone, she would want a family. That might be an unfair misreading for a human, but since we’re dealing with strict robotic logic, this may actually be a legitimate takeaway.