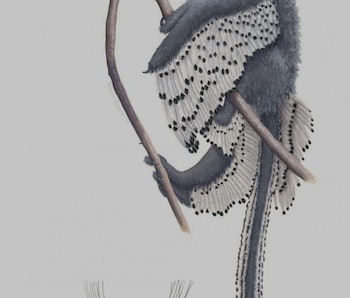 We’ve known for a while now that dinosaurs had feathers, but for the most part we’ve imagined they were tough, spiky-looking weirdos — a far cry from the soft, sleek birds of the modern age. A new examination of dinosaur fossils published Tuesday in the journal Paleontology, however, suggests that some of our Jurassic-age stereotypes need to be revisited.

In the paper, researchers from the University of Bristol report that one particular dinosaur genus, Anchiornis, had much fluffier feathers than modern birds. This small dinosaur, about the size of a crow, was a member of the group known as paravians, which includes other small dinosaurs such as Velociraptor and modern birds. By dinosaur standards, it’s pretty adorable.

Anchiornis was covered in feathers that have never been described before by paleontologists. These feathers, which had short quills and long, flexible barbs and were known as “contour feathers,” gave the dinosaur a fluffy appearance. Contour feathers, the researchers write, did not have barbs that zip together, unlike those of modern bird feathers.

The researchers got lucky with their Anchiornis specimen, which died under conditions that left its feathers separated from the body before they were fossilized. Using high-resolution imaging equipment to examine it, they were able to determine what function the strange feathers served.

They certainly weren’t good for flying. The researchers write that the fluffy feathers probably didn’t afford Anchiornis much protection from water or cold temperatures and furthermore, may have increased aerodynamic drag as it glided through the air. Additionally, since the barbs on the feathers didn’t zip together, they couldn’t have been used for flying anyway.

To compensate, Anchiornis had four wings as well as multiple rows of feathers that could have helped provide some aerodynamic lift.

The new paper, which presents a new illustration of how Anchiornis may have behaved in its habitat, builds on previous research that identified the color of this dinosaur, as well as the fact that its wings had multiple layers of feathers. The illustration, drawn by scientific illustrator Rebecca Gelernter depicts Anchiornis climbing a branch — not perching like a bird, as past illustrations have. This illustration represents not just a culmination of multiple studies on the dinosaur, but also a little bit of imagination.

“Paleoart is a weird blend of strict anatomical drawing, wildlife art, and speculative biology. The goal is to depict extinct animals and plants as accurately as possible given the available data and knowledge of the subject’s closest living relatives,” said Gelernter in a statement.

“As a result of this study and other recent work, this is now possible to an unprecedented degree for Anchiornis. It’s easy to see it as a living animal with complex behaviours, not just a flattened fossil.”

Check out this video of a 99 million-year-old dinosaur fossil.

More like this
Science
15 hours ago
The Plague Is Still Here — And It Could Infect Your Cat
By Tara Yarlagadda
Science
Jan. 29, 2023
Are coyotes dangerous to dogs and cats? Here’s how to keep your pets safe
By Tara Yarlagadda
Science
Jan. 25, 2023
Look: Primate relative shows how ancient animals adapted to global warming
By Jennifer Walter
LEARN SOMETHING NEW EVERY DAY.
Related Tags
Share: