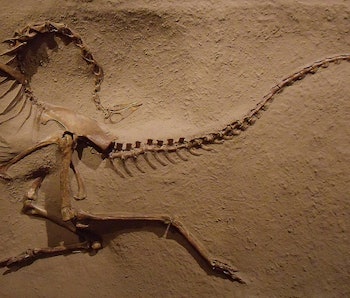 It’s accepted academic wisdom and fairly common knowledge that dinosaurs sported feathers, but neither skin nor quill fossilize particularly well so paleontologists have had to be somewhat speculative about giant, ancient plumage.

This is why when a University of Alberta researcher posted late last week that an undergraduate students had unearthed the remains of an Ornithomimus, which lived during the late Cretaceous Period — with prime examples of dermis and plumage — diggers perked up.

Previous finds of the Ornithomimus, a bipedal type of dinosaur known as a theropod, have held evidence of feathers. A skeleton found in 1995 had unidentified markings on its forearms that are now known to be indications of feathering, and in 2008 and 2009 Ornithomimus fossils were uncovered with true preserved feathers. The recent discovery goes a long way toward confirming suspicions and providing actual details.

“We now know what the plumage looked like on the tail, and that from the mid-femur down, it had bare skin,” discoverer Aaron van der Reest said in a statement.

Reest, who will publish his work in Cretaceous Research, claims his find exhibits preserved webbed skin from the femoral shaft (the femur is a thigh bone) to the abdomen, something never before seen in a non-avian dinosaur. Reest declares in his writing that the “plumage on this specimen is virtually identical to that of an ostrich,” which could mean the feathering was used to maintain body temperature.

The use of electron microscopy has also revealed a three-dimensional keratin structure within the feathers on the tail and body of the specimen. “This specimen also tightens the linkages between dinosaurs and birds, in particular with respect to theropods,” says Alexander P. Wolfe, an adjunct paleobiology professor at the University of Alberta and the second author on Reest’s work. “There are so many components of the morphology of this fossil as well as the chemistry of the feathers that are essentially indistinguishable from modern birds.”