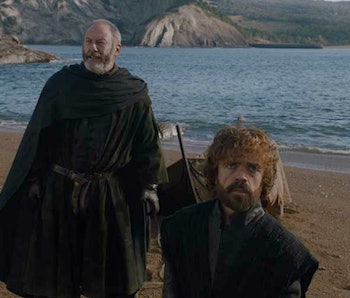 Ser Davos Seaworth is one of the most beloved characters on Game of Thrones for a reason. Despite his former life as a pirate and smuggler, Liam Cunningham’s Davos gives some of the soundest life advice on the show and acts as one of the final characters with any sort of real moral compass. Many fans fear this means he’ll die by the end of the show, but a recent interview gave Cunningham the perfect idea for how Davos’s journey will continue beyond Game of Thrones.

In an interview with Rolling Stone published on Monday, Cunningham discussed popular fan theories and potential outcomes for his character. One theory about Davos’s fate struck him as particularly good. It also feels totally worthy of one of those storied spin-offs HBO keeps talking about.

“In one of the many Lord of the Rings style epilogues, we’ll see Davos once more become a pirate smuggler, with Tyrion at his side,” the theory said.

“I really love going back to what we never saw Davos doing, which is his old job as a smuggler without dealing with that nest of vipers in Westeros,” Cunningham said. “So Tyrion and I, hand in hand, going off in my little ship into the distance with a beautiful soundtrack. I love it! I think it’s a lovely idea. Let’s do that.”

Tyrion and Davos teamed up at the end of Game of Thrones Season 7 to get Tyrion to King’s Landing so he could try and reason with his sister, Cersei Lannister. The romantic series ending (and what sounds like a fantastic spin-off) proferred up by this fan theory for the two is slightly different from their stressful trip to King’s Landing, but that scene absolutely proved what a good team they would be. Between Tyrion’s wit and Davos’s gruff charm, they’d probably be able to outsmart anyone in all of Westeros and beyond.

Game of Thrones fans will have to wait a while to find out Davos and Tyrion’s real fates, since the series finale still doesn’t have a premiere date.

Game of Thrones Season 8 does not yet have a premiere date, but rumors have pointed to a 2019 date.

If you liked this article, check out this video about incest in Game of Thrones.