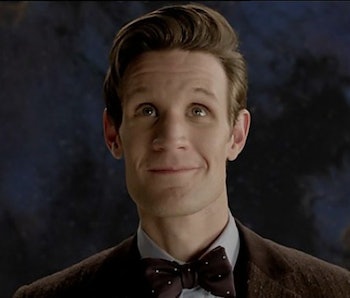 The 13th Doctor will soon board the TARDIS for a new collection of timey-wimey adventures. And while Jodie Whittaker’s arrival as the first female lead in Doctor Who history will undoubtedly bring on hordes of new viewers, past Doctors still weigh heavy on fans’ minds. One of the most popular Doctors in Who history, the 11th Doctor as portrayed by Matt Smith, recently hinted at his return. In fact, he’d be more than happy to hop back aboard.

While speaking to MTV in an interview published Thursday, Smith confirmed what Doctor Who fans have longed to hear: that he’d be happy to return as the 11th Doctor — with one stipulation.

“Yeah, I’d come back,” Smith said. “Why not? If the timing is right. Gotta give a few years to Ms. Whittaker to get the TARDIS under her belt as it were. I’ll be back one day, when I’m old and gray, which isn’t far off.”

It’s common for Who fans to fret over giving individual Doctors the respect they deserve. Any time Smith or Peter Capaldi — who will wrap up his time as the 12th Doctor during this year’s Christmas Special — are asked about their return, fans often jump in to shout about giving Whittaker a chance to settle into the role. Fans want Whittaker to be able to build her own legacy, especially considering her position as the first female Doctor.

Clearly, Smith understands the importance of letting Whittaker settle into the role before he goes anywhere near Who again.

As for the advice Smith, who portrayed the titular Doctor for three seasons, would give Whittaker, he said, “I will tell Jodie what I told Peter: Listen to no one.”

Smith encourages Whittaker to do her own thing, which feels like something Who fans can get behind.

The 2017 Christmas Special, Doctor Who: Twice Upon a Christmas premieres this Christmas on BBC America.