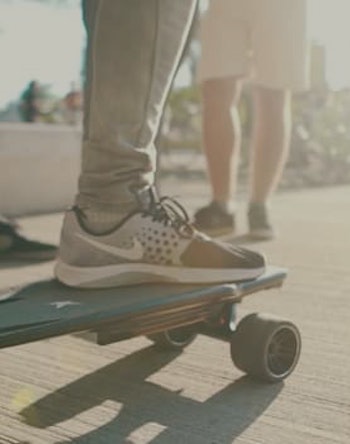 I couldn’t help but notice the sign as we walked onto the campus of New York University.

Loitering, skateboarding, or ball playing is not allowed.

It was the middle item that had me concerned, as I had come here very specifically to take a skateboard for a test drive. Then again, this wasn’t technically a skateboard, but a StarkBoard, a new electric board that needs no remote, travels up to 20 miles per hour, and lasts as much as 13 miles on each charge. I wasn’t exactly convinced such a fine legalistic distinction would convince an NYU security guard, but I wasn’t about to turn down the opportunity to give this thing a spin.

The product of the Berlin-based Stark Mobility, the board is currently in the middle of a round of crowdfunding on IndieGogo, with boards available for backers to purchase through December 8 for expected delivery in January 2018. With an early-bird price of $499 and a regular price of $549, the board is as much as a thousand dollars cheaper than the high-end electric skateboards currently on the market.

As Stark Mobility cofounder Kamil Banc tells Inverse, that speaks to a big part of what they are trying to accomplish with this board.

“I always love to compare to Tesla, where you see the Roadster and the Model S as the introduction — they’re really making it sexy and interesting versus the old golf cart electric vehicle — and now they’re rolling out the Model 3, which is more mass appealing,” he says.

In this particular analogy, StarkBoard only had to make the Model 3, but Banc has a long history with electric vehicles. The German-born engineer moved to Hawaii to found the renewable energy company Kuokoa, Inc. in 2010, and he has since become known in Honolulu as what he calls “the electric vehicle guy.” He was the first person in Hawaii to own a Tesla Roadster; he later spent a year using an electric skateboard as his sole mode of transportation, give or take a few Uber rides and one bus trip.

“I was actually very surprised on how reliable this is as a mode of transportation,” he says. “It’s more fun when the sun shines and everything and when it’s dry, but even with worse weather I was able to get around just fine, and I was actually more on time than ever before to my meetings because you don’t have to look for parking, no traffic jams.”

He’s not kidding about the skateboard working even in worse weather, nor his continued willingness to use it. He recalls getting into New York’s JFK International Airport in early 2015 and decided, despite the chills of the polar vortex, to not bother with a car.

“I came out of the airport, had my board with me, and I literally just took the checked luggage behind me as I would go through winter,” he says, evoking what one can only hope is a far more graceful version of Michael Bluth from Arrested Development pulling a purloined office chair behind his bicycle. “It was great. I loved it.”

People like Banc are the early adopters who have proven there’s an interest in electric skateboards as a mode of transportation. Now Stark Mobility hopes to bring it to the masses as a potential solution for what’s known as the last mile problem – the distance urban commuters have to go each day between public transit and either their home or their work. The people they are hoping to reach aren’t necessarily readers of Thrasher magazine.

Cutting the price down to something more people can afford is part of that process, and Banc credits the advances drones have made in miniaturized motors in helping to make electric skateboard technology more affordable. Stark Mobility also knows they are looking to attract a lot of total beginners, and the board is designed with them in mind.

The StarkBoard has adjustable modes from beginner to expert, with the former putting caps on the top speed and acceleration until the user gets comfortable and is ready to level up. The wheels are designed to not move right away when a person steps onto it, so the board doesn’t roll out from under the user. If a person does have to jump off the board mid-ride, the board automatically comes to a stop.

But the biggest innovation from existing skateboards comes in one of the fundamentals of its design. Other electric skateboards have riders control the board using a handheld remote. The StarkBoard eliminates that, so that the board is entirely controlled by how the person shifts their weight.

“Of course there’s a lot of technology involved, but it feels really natural,” cofounder Hannes Reichelt tells Inverse. “It feels more like riding on a snowboard or like surfing.”

While the team acknowledges people might feel some initial trepidation about riding a skateboard that can go up to 20 miles per hour with no remote control, Banc argues this is better in the long run.

“When you have a remote control in your hand you’re essentially adding an extra step for your brain to process,” he says. “You have to coordinate what you’re doing with your hand with the feedback from your feet, and your brain has to coordinate the whole thing. So we’re eliminating one step.”

Armed with this knowledge, it was time I tried out the StarkBoard. As is seemingly always the case when I test things for Inverse, I was doing so as pretty much a complete novice. As a teenager, I had long agreed with the sentiment of the iconic “Skateboarding Is Not A Crime” sticker, but — apart from a brief, ill-fated experiment with owning a board where I never completed so much as a solitary ollie — I had never been cool enough to abide by its more hardcore variant, “Not Skateboarding Is A Crime.

It’s easy to take on board (no pun intended) the idea that you control the board by shifting your weight, but I was way overdoing it in the early going. I was leaning forward to go and leaning back to stop, when the actual desired motions were much subtler and much more natural.

Wanting to get a little more distance, I shifted my weight to make a left turn and rolled toward another of NYU’s dormitory towers — just as a man who looked very much like a university guard walked out and turned toward me. I nonchalantly stepped off the board, picked it up, and started walking back to the StarkMobility team.

As it happens, the guard waalked by without ever saying a word. Skateboarding is not a crime, after all.