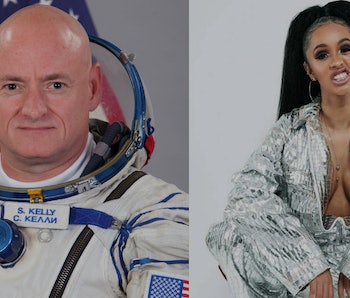 On Tuesday night, NASA astronaut Scott Kelly unintentionally willed the most perfect union into existence. Out of nowhere, Kelly tweeted his desire to collaborate with rapper Cardi B — only to delete it later.

“@iamcardib Scott Kelly here. Have some collaborative ideas. DM me,” Kelly tweeted, with absolutely no context. He followed up by tweeting “Cardi B” and a link to Fox News, leaving some people to wonder if he was confusing Twitter with Google — or if his account was hacked. In any case, it seems Kelly has deleted the tweets.

Thankfully, the internet is forever, and lots of folks kept the receipts:

In a certain light, a Scott Kelly/Cardi B Collaboration makes perfect sense. For one thing, they’re both American heroes. They are also two people who’d make excellent ambassadors for Earth, should aliens ever arrive. I am confident they’d make humanity proud.

While I don’t know Kelly or Cardi personally, I would be more than happy to facilitate this collaboration. It’s important to have goals, and my new one is to host a panel with these two talking about space and aliens and shoes.

Thank you, Scott Kelly, for not understanding the difference between Twitter and Google — and for giving us a bit of hope in this unbearably bleak year.