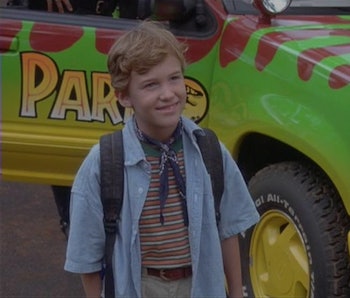 Jurassic World was okay. The opportunistic Twitter written by a grown-up, PTSD-ravaged version of the little boy in Jurassic Park is brilliant.

@The_Tim_Murphy has been writing about adjusting to life after almost being eaten by raptors for more than a year now. He also loves indie rock. We can only hope the new box office king brings him some deserved followers.

Here’s what he’s been up to this past Tuesday.

I yearn for the day Dad Boner finds a T-rex in his Sebring.

Incidentally, the actor who played Murphy, Joe Mazello, is still acting and, as of recently, directing. His own Twitter account of late is a treasure of humblebrag every time he flips across his most famous role. Honestly, I’d probably do the same.

How Jurassic Park’s Logo Designer Made Dinosaurs a Brand

More like this
Entertainment
Sep. 21, 2022
26 years ago, Star Wars fans invented their own calendar system — Andor finally makes it canon
By Ryan Britt
Entertainment
9 hours ago
Hellraiser release date, time, plot, cast, and trailer for Hulu's horror reboot
By Claire Fox
Entertainment
21 hours ago
Rings of Power Season 2's release date may be even worse than you thought
By Jake Kleinman
Share: