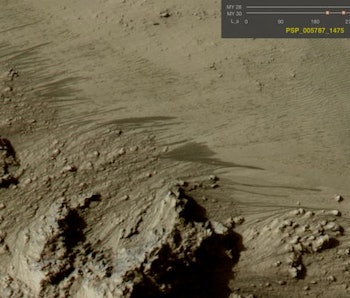 Mars is covered with spooky little grooves, some of which have been attributed to flowing water. Unfortunately, it seems scientists might have been a little off in their understanding of some of Mars’s lines — and it’s potentially a bummer for astrobiologists.

Historically, seasonal dark streaks on the Red Planet have been the source of some debate. Some scientists have suggested that these lines — called recurring slope lineae (RSL) — were caused by once-flowing water on the planet. Others have posited the grooves were created by the flow of something else, such as sand.

But a new study published Monday in Nature Geoscience bolsters the latter idea — that flowing sand and dust from avalanches could have created these dark streaks.

“The RSL (recurring slope lineae) on Mars behave in a similar way to laboratory experiments on Earth,” Planetary Science Institute Senior Scientist Jim McElwaine, a co-author on the paper, said in a statement. “What is still not understood is where the supply of fresh material comes from, though we do have some speculative ideas.”

If Mars’s RSL are indeed formed by sand — not water — that could be a sign that the Red Planet has been dry for a really long time. That doesn’t bode well for astrobiologists and other scientists hoping to find microbes on Mars.

Of course, we have a lot more searching to do before we know what the RSL are for sure. Hopefully we still find tiny traces of life no matter what.

To get to Mars, NASA is researching a high-tech bear den for astronaut “hibernation.”