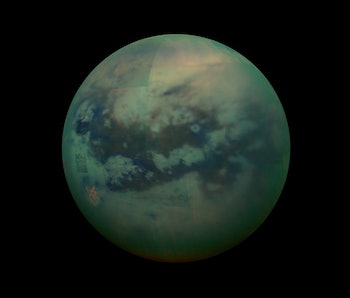 Saturn’s largest moon, Titan, is a truly inspiring hellscape. With methane lakes and electrically charged sand, it’s hard to understand anything about this hostile beauty. But with some data from NASA’s late Cassini spacecraft, scientists might have cracked the case one at least one of Titan’s many mysteries.

According to a study published Tuesday in Nature Communications, one of Titan’s polar hot spots on its south pole rapidly cooled back in 2012. This was a totally unprecedented event — apparently, models based on Cassini data from its 27 Titan flybys didn’t anticipate this strange cooling that caused a “winter polar vortex.” This cooler period lasted from 2012 to 2015.

The team thinks this weird winter could have been caused by heightened levels of trace gases produced within this hot spot, turning it from, well, hot to cold. While Titan’s brutal atmosphere is mainly composed of nitrogen and methane, an increase in these trace gases can drive down temperatures, and fast. Thankfully, this is something we don’t have to worry about here on Earth, or anywhere else really: Researchers think this relationship between trace gases and intense cooling is something only experienced on Titan.

“Winter polar hot-spots have been observed on other planets, but detection of post-equinox cooling is so far unique to Titan,” the researchers explain in the paper.

It’s possible this particular spot has warmed up a bit since Cassini took a nose dive into Saturn’s atmosphere back in September. For now, the story’s ending remains unwritten. Maybe this is just one more reason to send a Cassini 2.0 mission back to Saturn’s system.

Check out this video of what it looks like to land on an alien moon.

More like this
Science
19 minutes ago
How the Webb Telescope is Rewriting What We Know About the Early Universe, One Galaxy at a Time
By Doris Elín Urrutia
Science
Feb. 4, 2023
Astronomers May Be on the Cusp of a “Potentially Revolutionary” Cosmological Breakthrough
By Universe Today and Matt Williams
Science
Jan. 29, 2023
NASA-funded study to research if bacteria could help form building materials on Mars
By Matt Williams and Universe Today
LEARN SOMETHING NEW EVERY DAY.
Related Tags
Share: