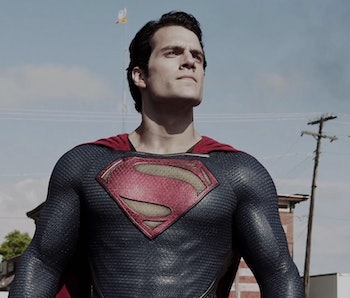 Justice League isn’t a good movie, but the heartbreaking thing about its many failings is that they overshadow some truly bright, promising moments. Sure, the movie’s main problem was that the fun bits were totally jarring in the middle of a tonally schizophrenic cinematic mistake, but these moments, taken in isolation, actually instill this cynic with hope for the future of the DCEU.

It’s fitting then, that the best part of the movie is the charming, intentionally somewhat awkward first scene where Superman tells a bunch of kids what it means to be hopeful.

There are heavy spoilers for just the first minute of Justice League below.

The first 50 or so seconds of the movie are all we see of Henry Cavil’s Superman until much later in the film, when he’s in a much worse mood having woken from a long dirt nap. But, that opening scene, shot with a smartphone from the perspective of a group of kids making a podcast, is delightful.

Superman’s chatting with some first responders after saving the day. It doesn’t look like the scene took place after one of the massive calamities depicted in Man of Steel or Batman v Superman. No, this is a more run-of-the-mill day saving, and Superman gets a chance to talk with some of the kids who look up to him.

Excitedly, the kids ask questions at too rapid (and confusing) a clip for Superman to respond to. How many people has he saved? Has he ever fought a hippo? But, when one asks if the “S” on his chest really means “Hope,” he answers.

“Yes, it’s meant to. It’s meant to wind, like a river. It comes and goes. My—“ he begins, before changing some detail to help preserve his secret identity. “A man I knew, said that hope was like your car keys. Easy to loose, but if you look around, it’s usually close by.”

“What’s the best thing about planet Earth?” another kid asks.

Superman just looks up to the sky, grappling with the question, and smiles, before the screen cuts to black and the rest of the movie begins.

In Man of Steel, Superman grapples with hiding who he really is, then demolishes a city while battling aliens that are only on Earth because he’s there. In BvS, some people (including Congress) hate him, but the people who love him are depicted in grim, slow-motion shots of disasters or a weirdly haunting Day of the Dead celebration. Then Batman tries to kill him. Then he dies. And Justice League shows us that everybody misses Superman.

Problem is, thanks to the DCEU’s past missteps, Superman has been too dower and complicated a figure for us to believe that he’s really beloved, or that he does anything but mope. (Do a Google Image Search for “Superman smiling.” You’ll see lots of Christopher Reeve and animated depictions of Superman, but almost no DCEU. It’s telling.)

In one minute, though, Justice League changes that. It’s a little forced, sure. He’s a little awkward, but he’s very relatable, charming, and, above all, good. The scene taps into the imperative optimism of the character.

The best depiction of Superman ever is this one page from All-Star Superman, when the Man of Steel stops a girl from killing herself, reassuring her that she’s stronger than she thinks.

Superman’s Snapchat cameo at the beginning of Justice League isn’t that. But, it makes me think, for the first time, that the DC version of Superman could be that.

So, fine. The casual jokes he cracks with Cyborg during the big climatic battle feel weirdly out of place. I’m glad they’re there, though, if only because it means that maybe this new, brighter, cornier, and better Superman is here to stay.

The DC cinematic universe has mostly been a bummer and a disaster, Justice League included. But, I’m hopeful for the Man of Tomorrow.

Justice League is now in theaters.

The stars of Professor Marston and the Wonder Woman talk about how psychology helped make one of the year’s most emotional biopics.