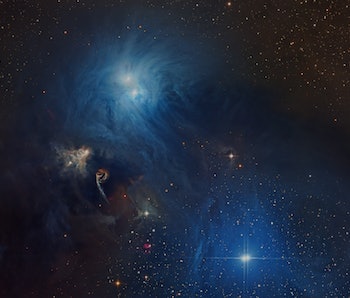 It’s tempting to think of planets as basically closed-off systems, totally isolated from the rest of the universe — you know, like a shut-in preparing for the latest dreary winter — but it’s just not the case. There are of course the occasional meteor impacts — the late-night food deliveries of extremely healthy things like pizza and cake, if you will — to break up the tedium, but, as a new study suggests, it’s the dust you really have to pay attention to. The dust is always coming. At least the dust getting into your (sorry, sorry, that hypothetical shut-in’s) apartment isn’t traveling at 40 miles per second.

It’s this hypervelocity space dust that University of Edinburgh astrophysicist Arjun Berera suggests could be responsible for sending Earth’s organic particles throughout the solar system and possibly the entire galaxy. His study, set to be published in the journal Astrobiology and available in pre-print on arXiv, is a new twist on the more familiar concept of panspermia, in which objects like asteroids and comets could carry organic particles or even extreme organisms like tardigrades from world to world.

All that’s needed in this scenario, though, is the streams of dust. More than 100 tons of fast-moving space dust enters Earth’s atmosphere every day. Berera’s hypothesis is that there will be occasional collisions with particles in the upper atmospheres, and that some of those will be organic molecules or even full-on microorganisms, and that some of those will be struck just right to send them sailing off into space.

It’s all like a big game of cosmic billiards, except instead of sinking the eight ball into the corner pocket, you instead send it hurtling off into the depths of space forever. Which, come to think of it, would make the all-black eight ball pretty hard to see against all that void. Maybe try hitting one of the nice bright-colored balls into space instead? Come on, step up your game, whoever you are in this increasingly convoluted analogy.

While a lot of panspermia theories focus more on organic particles originating elsewhere and being brought to Earth, this paper instead focuses entirely on the prospect of our planet’s own seeds of life being sent out into the cosmos. The dust would need to reach speeds of 26 miles per second to reach escape velocity from our solar system, which is certainly possible after a collision with dust traveling nearly twice that speed.

Berera estimates that our planet’s organic material could have traveled as much as 30,000 light-years over the past few billion years, enough to reach most of the galaxy. Our planet could have been seeding the cosmos for eons before humans even started to evolve, and we’re only now realizing it.

Let’s hope we’re not about to get hit with a whole bunch of summonses for galactic family court.

Ever wonder how the Guardians of the Galaxy travel so dang fast? A theoretical physicist explains.

More like this
Science
6.22.2022 10:15 AM
Ice could bring an unexpected key ingredient for life in alien oceans
By Kiona Smith
Science
6.13.2022 11:00 AM
The best defense for humans against radiation on Mars may be a rustic mix of ice and dirt — study
By Matt Williams and Universe Today
Science
6.27.2022 11:00 AM
Letting your cat go outside could spread “life-threatening” parasites — new research
By Amy Wilson, Scott Wilson and The Conversation
Related Tags
Share: