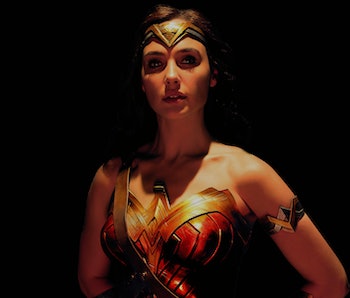 Of all the strange character follies in Zack Snyder and Joss Whedon’s Justice League — from Ezra Miller’s played-up, wide-eyed innocence as Barry Allen to Ben Affleck’s palpable exhaustion with the role of Bruce Wayne — Gal Gadot’s Wonder Woman suffers the most.

Simply put, Wonder Woman falls victim to the male gaze in Justice League. Wonder Woman comes into any scene either ass or chest-first throughout the film, the camera leering up her skirt on more than one occasion, but Justice League’s wholly expected over-interest in Gadot’s physical assets are only the more obvious part of the problem. Rather than giving any sort of agency to its only female superhero and taking a hint from Patty Jenkins’s astronomically successful Wonder Woman (2017), Diana Prince lives and breathes by Bruce Wayne’s reassurance of her character in Justice League.

These problems are not by any means surprising given how Diana has been treated outside of her own origin story in the DCEU.

A similar problem with Diana’s agency occurred in 2016’s Batman v. Superman: Dawn of Justice, also directed by Snyder, which saw Diana Prince acting as a ghostly siren to add to Bruce Wayne’s frustrations. As Bruce and Clark Kent participated in a dick measuring contest at Lex Luthor’s party, Diana flitted in and out of frame, an exquisitely dressed, booby cipher with a permanent smirk.

Diana teases Bruce for his curiosity in BvS; audiences with no prior knowledge of Wonder Woman would have viewed this leggy temptress as a sort of DC-style Bond girl, a puzzle meant only to serve Bruce’s fantasy.

Eventually, the audience learns that this mystery woman, instead, has spent most of Batman v. Superman trying to stop the world from finding out that she’s an ageless being. Bruce just keeps getting in the way. She saves Batman and Superman’s asses in the nick of time, mustering her way through Snyder’s full body sweeps with the camera to save the previously dueling heroes from their own machismo.

Of course, BvS couldn’t let Diana’s entrance as Wonder Woman slide without making her a punchline — “I thought she was with you” — so her return to her pedestal as the greater DCEU’s pretty prop in Justice League is more disappointing than surprising.

It just so happens to be that much more disappointing after Wonder Woman.

Jenkins’s Wonder Woman reintroduced the world to the character DC fans have always known and loved. Casual fans learned that this immaculate but lifeless woman first introduced in BvS is, surprise, a literal half-goddess, heir to her mother’s throne and raised from a young age to be the best warrior in a race of warrior women. Aside from her titles, the world also learned that Diana Prince embodies hope, light, and life — she believes in love above all else and always leads the charge to do what’s right.

So why is she stripped so bare of these defining features in Justice League?

Sure, Diana is still the most human of her fellow Leaguers, gently ushering Victor Stone’s Cyborg (Ray Fisher) and Barry’s Flash to believe in the best, most heroic parts of themselves, but half of her role as mentor and guiding light is absorbed by Bruce. Diana’s role is reduced to make way for him.

This change in character dynamics is spectacularly weird and, for many Wonder Woman fans, hurtful. Bruce pretends at making Diana his equal throughout Justice League but regularly becomes frustrated when things don’t go his way. At the end of it all, Batman is still the one to take charge despite his plans regularly sucking (such as Batman drag racing the Batmobile through enemy territory and belatedly realizing that attracting all the Parademons is a “bad idea”). Wonder Woman rallies Flash, Cyborg, and Aquaman (Jason Momoa) to save Batman from his own horrible plan, but it’s Bruce who receives congratulations for spurring Diana into action in the first place.

In Justice League, Snyder and Whedon make the nauseating argument that Bruce Wayne, DC’s poster boy for angst and king of bottling up your emotions, was the first person in a century to convince Diana Prince of her own validity. A woman raised by women to be a leader and fighter, a hero who has defeated gods and adapted across lifetimes, is diminished to the part of Batman’s student. But, of course, Diana can still saunter Bruce’s way when he’s injured to flirt and forgive him for his manly mistakes.

Combine this bastardization of Diana’s journey thus far with the lewd gaze of the camera, Gadot’s butt often hanging just out of focus while another character speaks as the true focus of the scene, and it’s no wonder why Diana felt so off base. The Wonder Woman of Justice League was not really Wonder Woman; she was a loose approximation of the character, made up to be some dude’s badass eye candy.

The Wonder Woman sequel premieres in theaters on November 1, 2019.

The stars of Professor Marston and the Wonder Woman talk about how psychology helped make one of the year’s most emotional biopics.