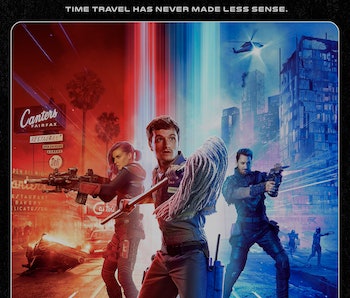 In Hulu’s newest sci-fi comedy series Future Man, a gamer beats an unbeatable video game and is suddenly thrust into a time-traveling adventure to prevent the coming apocalypse. The show itself offers up a crass, hilarious brand of humor Seth Rogen fans will love, but hidden between the dick jokes and gratuitous violence is a compelling look at someone discovering their own moral compass.

When two warriors from the future called Wolf and Tiger travel to Josh Futturman’s (Josh Hutcherson) present day, they hope to find a warrior as badass as his “Future Man” avatar from the game. Instead, they find a nerd that’s totally useless in a fight.

The show doesn’t shy away from the irony or social commentary about a kid that relishes in hyper-violent games but hates killing in real-life, even when it could save the world. In the bleak future, Wolf and Tiger have lost any and all sense of morality. To them, killing is a utilitarian necessity, but Josh finds it intolerable.

But could that sensitivity actually be his greatest strength?

Inverse recently caught up with the show’s co-creators, Kyle Hunter and Ariel Shaffir. They explained that Josh’s weakness as a character is what helps him transition from wannabe savior to a truly morally-minded good guy.

Josh’s status as a hardcore gamer seems pretty central to his character. How does it impact where the show goes and what Josh is capable of?

Ariel Shaffer: We didnt really make the show for or against gamers. As the story moves on from the pilot, Josh isn’t playing the game anymore. It’s more the game coming to life and him having to deal with the ramifications of that. It serves as an entrypoint for the story.

Kyle Hunter: If there’s any comment on gaming in general with Future Man, it’s that Josh plays this ultra-violent game set in the future. Somehow that doesn’t bother him. But once he sees that same violence in real-life, he realizes quickly that he doesn’t have the stomach for it. The real version is just not how it’s portrayed in video games.

As the show moves on, a kind of morality in him rises to the surface to determine what he’s willing or not willing to do in order to save the world.

His identity also plays on some millennial stereotypes about unfulfillment and frustration. What made you guys want to explore that in your protagonist?

Kyle Hunter: We wanted to make Josh relatable and likable, starting in a place where he wants so badly to be special and to do something more meaningful in his life. When presented with the opportunity to save the world, he jumps at it even though he’s not equipped for the situation.

We wanted him to have a place to grow from but also not in a sort of “I’m the Chosen One Luke Skywalker!” kind of way. We wanted to do it in a way that’s a little more unique in terms of how he becomes a leader and a hero.

Ariel Shaffer: We made a conscious effort to think of it like this: If Josh has a superpower, it’s his knowledge of sci-fi genres and movies. That’s what gives him the ability to navigate Tiger and Wolf — and himself — through the situations that he’s presented with. But his morality is another kind of power.

He’s an ordinary guy with a good, ordinary moral center all set against these two warriors from the future who don’t have much regard for human life.

Recognizing the inherent value of human life might not sound like the ultimate goal for a show about video games and rude humor. But, in Future Man, the morality tale is where the entire show levels up.

**Future Man’s first 13-episode season is currently available to stream only on Hulu.**