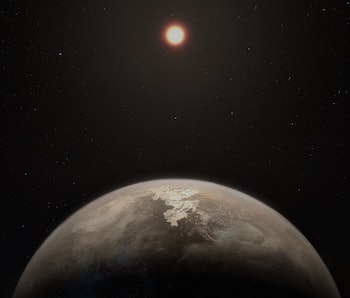 Right now, astrobiology nerds are divided into two different fandoms when it comes to the best exoplanet(s): the TRAPPIST-1 system versus Proxima b. While Proxima b is definitely closer to Earth, a newly discovered exoplanet gives both TRAPPer Keepers (the unofficial TRAPPIST-1 fandom) and Proxima b enthusiasts some serious competition.

Using the High Accuracy Radial velocity Planet Searcher (HARPS) at La Silla Observatory in Chile, researchers at the European Southern Observatory (ESO) have discovered that a red dwarf star — Ross 128 — has an Earth-sized world orbiting around it. The team believes the planet — Ross 128b — has a surface temperature that “may be close to that of Earth.” However, it’s still unclear where the planet lies in relation to the habitable zone, or the region in which a planet could support liquid water. A paper detailing the discovery will appear in Astronomy and Astrophysics.

The discovery is exciting for a few reasons. For one thing, according to the ESO, “Ross 128 is the ‘quietest’ nearby star to host such a temperate exoplanet,” which means its red dwarf star doesn’t throw off a ton of deadly radiation. This is one of the main reasons scientists are wary about Proxima b’s ability to host life; its star emits so much ultraviolet and X-ray radiation that it might render the planet lifeless. A “quieter” star-like Ross 128 might be more suitable for supporting life on this newly discovered exoplanet.

It’s also worth noting that Ross 128b is expected to snatch Proxima b of its title as closest exoplanet to Earth. Though it’s currently 11 light-years from Earth, its star is expected to become our “nearest stellar neighbor in 79,000 years,” the ESO reports. Take that, Proxima b stans!

When it’s completed, ESO’s Extremely Large Telescope will scope out Ross 128 for more information. For now, we welcome a new exoplanet into the fandom wars — be nice, everyone.

More like this
Science
Sep. 24, 2022
Super-Earths may be the best places to look for alien life
By Chris Impey and The Conversation
Science
Sep. 25, 2022
Mars’ ancient lakes could help discover life on the Red Planet
By Matt Williams and Universe Today
Science
Sep. 20, 2022
New study shows one of Saturn’s icy moons may be extremely habitable
By Kiona Smith
Related Tags
Share: