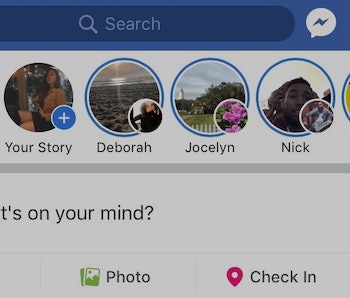 The Snapchat look-alike feature, which originally launched on the Facebook-owned Instagram in 2016, hasn’t exactly taken off on Facebook’s feeds. That hasn’t stopped the company from expanding its use to its Groups and Events pages, as the company confirmed Monday.

Facebook’s product manager Connor Hayes said the new feature addition is meant to “give multiple people the opportunity to tell a Story from multiple different angles.”

Similar to Snapchat Groups, the feature will allow users to collaborate on Stories. However, Facebook users will be able to use Stories within private Event and Group pages, giving them the option to create “private” stories for say, a birthday or engagement party event.

By expanding the Stories feature, it seems Facebook is hoping Friends will be encouraged to stitch together ephemeral footage and images throughout the platform.

The question is: Why won’t Facebook let Stories just live on Instagram, where the feature does amazingly well? Most likely because it needs to recreate their success across all its platforms.

It’s not just interspersing Stories onto as many pages as possible, though. To show just how serious they are about Stories’ success on Facebook, the company recently announced an overhaul of the entire feature, not long after its initial lukewarm launch.

Facebook is replacing Messenger Day with Facebook Stories, further integrating Stories and their replies within the Messenger app.

“We needed to make it easier for people to share Stories across different apps,” Facebook’s product manager Connor Hayes said. “Some people actually thought these experiences were already connected. We feel like it would make sense.”

More like this
Innovation
22 hours ago
Artificial photosynthesis can grow plants without light — and may solve a planetary dilemma
By Steph Lee
Innovation
6.25.2022 10:00 AM
9 veggies that are healthier cooked than raw
By Laura Brown and The Conversation
Innovation
6.24.2022 5:00 AM
Beam-steering radio technology could help autonomous cars finally hit the road
By Sascha Brodsky
Share: