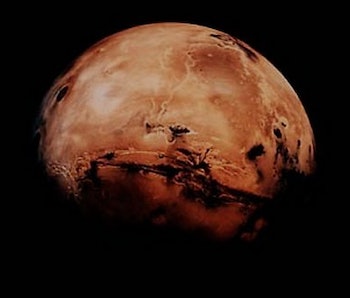 After eight months in a dome on the slopes of the Hawaiian volcano Mauna Loa, six scientists finally got to stop pretending they were on Mars. That meant a reintroduction to all the creature comforts of baths, peaches, and, well, deviled eggs, a step up from six-minute weekly showers and space food.

Saturday marked the end of the third mission from the NASA-backed Hawaii Space Exploration Analog and Simulation, or HI-SEAS. Scammy crowdsourced Mars plans aside, there are quite a few kinks that need to be ironed out before a serious trip to the Red Planet launches. (One big problem? Radiation, as Mars can’t hold a candle to Earth’s shielding magnetosphere.) A Mars trip won’t be just technologically challenging — like the great expeditions of yore, it will tax explorers psychologically, too. To get a better handle on depression and isolation, that’s where missions like HI-SEAS come in. These domes simulate an environment where astronauts all just have to get along, even if Dave keeps mangling the freeze-dried chili.

Observers relied on surveys, biometric trackers, and security cameras to made sure the faux Martians kept their heads. To keep it extra real, the scientists had to wear space-suits every time they ventured outside — which, at 8,000 feet up a volcano, does a remarkable Mars impression. “When we first walked out the door, it was scary not to have a suit on,” Purdue University graduate student and crew person Jocelyn Dunn told the AP.