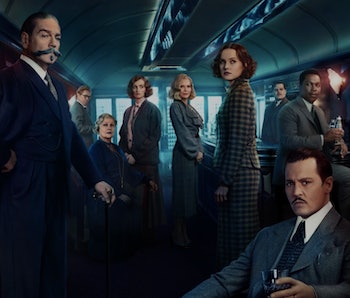 Even if you love a good mystery, part of the thrill of getting to the end is realizing you had no chance of ever really solving it in the first place. Agatha Christie, author of the famous whodunit Murder on the Orient Express, which is now enjoying a star-studded new film adaptation, is the master of this form. If you’ve never read Orient Express, arguably her most famous, the twist ending of the movie will probably shock you. The reason she gets you every time, psychology expert and author Maria Konnikova tells Inverse, is that Christie is a lot like a skilled con artist.

“Con artists are so successful because they tell really, really good stories,” she says, explaining the correlation between Agatha Christie weaving a complicated mystery and someone trying to rip you off.

There are a lot of logical inconsistencies to overlook in the new Orient Express. Why is this train trapped in the snow? Why are all of these people so suspicious? What’s up with this detective’s crazy mustache? What Konnikova asserts is that, despite all of these outrageous eccentricities, Christie makes the reader feel like they’re participants in the story, which is why they buy into the mystery — and eventually, the surprising twist.

One of Christie’s characteristic techniques for drawing in her readers is using a set number of suspects, which gives readers the sense that they can solve the mystery themselves by process of elimination. In other words, it creates a kind of logic puzzle in which the reader doesn’t have all the answers.

“This actually helps with your sense of transportation and involvement because you can feel like you’re the detective more, because if it’s a little too out there, like Agatha Christie makes you feel like you could actually solve this story,” Konnikova explains.

Still, the real rub of Christie’s twist endings is usually hiding in plain sight. But because the reader has been looking for a twist, it makes it harder to actually find one, says Konnikova. Searching for the twist creates a feeling of familiarity — which is when we’re most vulnerable to surprise.

“The surprise element is still something that really, really hooks our brain, or is something that seems surprising. So, that actually is the trick to familiarity plus surprise,” she says.

But Christie aficionados can be fooled by her mysteries just like everyone else, even if they are primed to know what to look for. What makes her a a master of her craft is the fact that she can trick even seasoned readers into feeling that familiarity that Konnikova described. Christie even managed to trick Kenneth Branagh, who directed and starred in the new Orient Express.

“The numbers game ups the chances of her being able to surprise us,” Branagh tells Inverse.

“If you suddenly put 15 people in a mystery, there are almost too many options,” Branagh admits he recently read another Christie mystery, Murder in Mesopotamia, which he believed he would be able to solve.

“I thought, oh I know how she works. But she got me. It was a beautiful surprise. She bluffs you. And with enough people to divert. And she has the technical means as a storyteller to keep you hanging.”

Unsurprisingly, Branagh’s comments ring in perfect accord with Konnikova’s confidence scheme analogy. He even uses similar language to describe the elusive and tricky brilliance of Christie’s crafty capers.

“I think Agatha Christie is a great gambler,” Branagh says.

Murder on the Orient Express, directed by Kenneth Branagh is out in wide release now from 20th Century Fox. Maria Konnikova is the author of the books Mastermind: How to Think Like Sherlock Holmes and The Confidence Game: Why We Fall For It Every Time