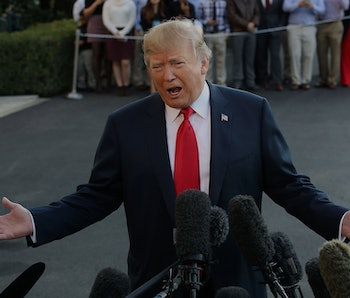 On Thursday, Donald Trump’s foremost mouthpiece for communicating with the public, his Twitter account, disappeared from the world for 11 minutes. The New York Times is now reporting that it was a contractor working for Twitter likely via a third party that was responsible for our short respite.

According to The Times, Twitter is known to outsource content review to companies like PRO Unlimited and Cognizant. This new information, provided by anonymous sources, speaks to the matter of just how many people have broad-reaching access to customer accounts at Twitter.

The Trump Twitter silence started around 6:45 p.m. Eastern, after which the account was up and running like nothing had happened. But the blip was noticed by a lot of people. Trump’s account has 41.8 million followers and he has tweeted over 36,000 time; his bombastic presence on the social media platform has made headlines since he assumed office.

An hour later, the internet was dying to know what had actually happened, and Twitter released an official statement:

Earlier today @realdonaldtrump’s account was inadvertently deactivated due to human error by a Twitter employee. The account was down for 11 minutes, and has since been restored. We are continuing to investigate and are taking steps to prevent this from happening again.

Two hours later, Twitter fessed up that the account deactivation hadn’t been an error at all, rather, it was a Twitter employee making a statement on their last day of work for the company.

Adding a human face to the silencing of one of the world’s most prominent politicians sent the internet into a frenzy overnight, with some calling the employee a hero, while Trump himself referred to them as “a rogue.”

Since then, we haven’t heard much of an update from Twitter. Emily Horne told The Washington Post Friday: “We won’t have anything to share beyond the Tweets we put out last night.”

It’s not unusual for Twitter employees to suspend suspicious accounts for violating their terms of use. And Twitter has admitted that a lot of these suspensions are very subjective, and it’s trying to improve that. But the public outing of a contract employee going as far as to deactivate an account is new public ground for the social media platform to contend with.

More like this
Culture
Sep. 16, 2022
How an ultra-nationalist religious group became one of the most popular film producers in Japan
By Alicia Haddick
Culture
Sep. 20, 2022
5 amazing sci-fi shows and movies leaving Netflix in September 2022
By Robin Bea
Culture
Sep. 17, 2022
You need to watch the most realistic apocalypse movie of the century on Netflix ASAP
By Jake Kleinman
Related Tags
Share: