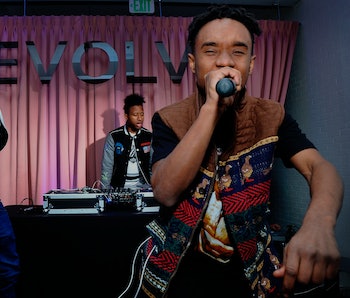 It’s the midpoint of 2015, so today I’m laying out the best records of 2015 so far. Accept no substitutions.

It seemed like a tall task to make an album of stuff roughly as good as “No Type” and “No Flex Zone,” but alongside producer Mike Will, the bouncy Mississippi duo pulled it off. SremmLife, both the record and the free-spirited lifestyle it inspires, is possibly the year’s best debut.

A$AP Rocky peeled back to the sound that brought him to the goddamn dance, and without the diminishing returns of LongLiveA$AP. This record is headier, lusher, thicker with the dense production that Rocky excels on top of.

Drake: ‘If You’re Reading This It’s Too Late’

Drake fucked up Kanye’s whole year by releasing the surprise “retail mixtape” If You’re Reading This, It’s Too Late, capping a somewhat unholy 18 month run. This record was beamed toward the type of fan that complains that Drake can’t rap; each song on If You’re Reading This is an exercise in proving those people wrong. With an assist from an all-star cast of producers, Drake out-rapped everyone. Kanye, if you’re reading this…

A rock act achieves success, and then alters the formula and an “experimental” — at least in the band’s eyes — way: this is a gambit that doesn’t always pay off. But on Alabama Shakes’ Sound & Color, the Alabama quartet chases deeper, darker, more soul-music-laden roots and comes up with a record that makes their debut — which went gold, by the way — sound like a foonote. Brittany Howard’s singing on this record is nothing short of monumental.

In a year where people seem to be getting a little tired of the same old EDM, Madeon opens the sunroof on Adventure and lets the light pour in. A record that was years in the making, Madeon steers the maximalist sound he came up on into something fun, soaring and distinct.

Natalie Prass made a career behind the scenes before she started recording in her own right, and her debut album is a clinic in attention to detail. While Prass’s voice isn’t the weapon it is for someone like Brittany Howard, she builds her florid sound around it for some of the year’s strongest, most melodic singer-songwriter music. The Nashville native takes an avalanche of influences and crafts them into something articulate and sweet.

More like this
Entertainment
5.12.2022 6:34 PM
The secret reason Christopher Walken was destined to play the Emperor in Dune: Part II
By Ryan Britt
Entertainment
17 hours ago
Stranger Things cast unpack a "quite metaphorical" Season 4
By Eric Francisco
Entertainment
14 hours ago
Andor will bring the best part of Rogue One back to Star Wars
By Alex Welch
Share: