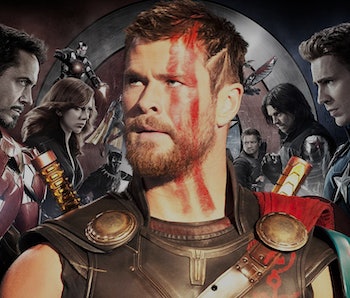 Captain America got to hang out with almost all of the other Avengers in his last solo movie, but Thor wasn’t so lucky. In Thor: Ragnarok, the God of Thunder partners with the Hulk, and has a brief run-in with Doctor Strange, but the rest of the MCU’s finest heroes are MIA. Director Taika Waititi knows why.

In cheeky appearance on Entertainment Weekly: The Show, Waititi explained some of the other Avengers’ reasons for leaving Thor high and dry. But, uh, his explanations probably aren’t Marvel canon.

“Captain America would have loved to have helped Thor take on Hela. Unfortunately, he had jury duty,” he joked. “I was once on a jury in New Zealand where 17 avocados went missing from a local farm. We never found the culprit.”

“Spider-Man wanted to be there but he’s in high school,” he continued. “He couldn’t get his aunt may to write a note that said ‘Peter Parker can’t come to class today because he’s on another planet fighting gods.’”

“Black Widow would’ve pitched in with Thor if she had been free at the time, but she wasn’t free at the time. She was a prisoner for stealing 17 avocados from a local New Zealand farm – wait a minute,” Waititi dryly recalled, closing the loop on his earlier joke.

“Tony Stark, a.k.a. Iron Man, was dealing with some other stuff, but his coat and glasses do appear,” he finished. That’s true — Bruce Banner wears Tony’s Duran Duran shirt and stylish/kinda douchey jacket and glasses at one point.

The real reasons why the other Avengers weren’t in Ragnarok is, probably, because having all of them in the God of Thunder’s third solo film would’ve totally stolen Avengers: Infinity War’s thunder. And, trust us, Thor and the Hulk is really all Ragnarok needs to be great.