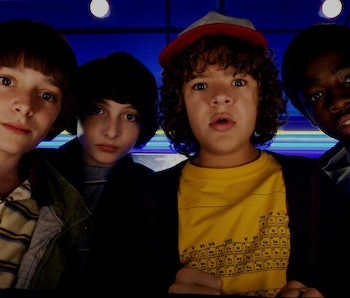 Not everybody made it out of Stranger Things 2 alive. The Upside Down, and the Demogorgon-like Demodogs ate some folk, but the writers behind Netflix’s hit show have confirmed that one character did not meet a grisly end, even though their ultimate fate was never shown on screen.

In Episode 3, Dustin discovered a gross booger-pollywog, which he names Dart. Even though the thing is disgusting and clearly from the Upside Down, the kid falls in love with it, and opts to protect it at the expense of his friends. To keep Dart safe and hidden, he evicts Yertle from his tank, placing the reptile on the floor and plopping Dart under the heat lamp, which he quickly turns off.

It’s the last we see of Yertle, which is troubling, as Dart later escapes his containment and murders the Hendersons’ other pet, a delightful kitty named Mews. (I demand justice for Mews!)

Given that Dustin already caused the death of one of his pets, fans were right to worry that he also had cold blood on his hands, as Yertle could’ve been an easy snack for Dart. Or, like, maybe he just crawled into a closet, got lost, and starved to death, because Dustin clearly doesn’t care for him. Dustin is a bad pet owner, y’all!

“Yurtle the Turtle is safe. He’s here with me. We’re scrolling through Twitter together. He’s trolling cyber-bullies. It’s a great time,” the said.

Chances are the second part of that statement is non-canon, but at least the writers say he’s not in turtle heaven.

Bob, though? No such luck.

Stranger Things 2 is currently streaming in its entirety on Netflix.

More like this
Entertainment
Jan. 14, 2023
James Cameron’s attack on Netflix gets 2 major things wrong — and one right
By Jake Kleinman
Entertainment
11 hours ago
65 dank things on Amazon that are so freaking cheap
By Veronika Kero
Entertainment
Jan. 28, 2023
Where and how to watch the 2023 Oscar nominees
By Mónica Marie Zorrilla
LEARN SOMETHING NEW EVERY DAY.
Share: