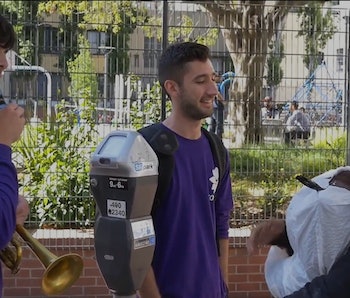 An app called Concrn is hoping to have trained volunteers replace the police when it comes to people responding to mental health crises.

For those in marginalized communities, alerting the authorities to someone dealing with a mental health crisis can make for a useless, even violent response, especially since most police offers aren’t specifically trained or equipped to deal with mental health.

Despite the Silicon Valley-style elided vowel in its name, Concrn isn’t a traditional startup, but rather a nonprofit based in the Tenderloin section of San Francisco, using an on-demand app for quick assistance from “first responders.” The mobile app — which gets between five to 10 requests per day — has responded to over 2,000 crisis reports since its 2014 launch.

Concrn’s lead team coordinates the response, along with weekly crisis volunteers from the Tenderloin community.

“Our focus has been to create economic opportunities for people in the Tenderloin community who have previously been marginalized or unable to access employment and also people who have experienced their own mental health crisis in the past,” Concrn’s co-executive director Neil Shah said.

Once the trained volunteers arrive on the scene, they help determine if the police should be involved or if they should handle it on their own.

The startup says the volunteers all come from backgrounds in social work or emergency medical training, and they are required to go through a 20-hour training session. However, there’s no word on whether they get retrained regularly with updated practices.

“From there, it’s connecting the person to relevant services, like walking someone to a shelter, retrieving information about them from a case manager and ensuring they get reconnected,” Shah said.

The startup, which works with local city organizations, hopes to expand to more cities — like New York — to continue providing a buffer response system between people with mental health and the cops.

If you liked this article, check out this video that explains the science behind why we love our friends so much.