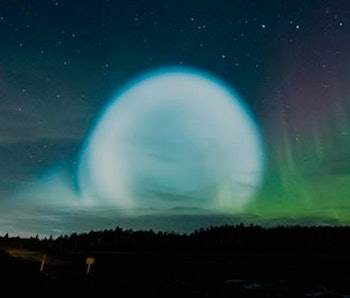 Late last week, several people in the Yamalo-Nenets region of Russia posted pictures on social media of a giant, glowing circle in the sky. Obviously, the weird event inspired a ton of even weirder explanations, including aliens and/or the apocalypse. Now, a Harvard astrophysicist tells Inverse what that ominous orb actually was — to almost no one’s surprise, it’s not aliens. Sadly.

On October 26, Russia’s Ministry of Defense posted on Facebook that it had launched a Topol-M ballistic missile as part of a test. According to Jonathan McDowell, an astrophysicist for the Harvard-Smithsonian Center for Astrophysics, this is indubitably what caused the glowing ball in the sky.

“Whenever we see these bubbles it’s always during a missile launch,” McDowell tells Inverse. “What happens is that the exhaust gas from the rocket out in space expands nice and symmetrically, unlike gas inside our atmosphere which has to contend with pesky complications like winds and local conditions. But to see it you have to have the sunlight catch the gas at the right angle. Think of it as an outer space rocket plume rainbow.”

Basically, all of this is to say that these weird orbs of light — no matter how otherworldly they look — are actually manmade. The only creepy thing here is intercontinental ballistic missiles, and why Russia was launching them on a random night in October.

If you liked this article, check out this video which explains the xenomorph life cycle in the Alien movies.