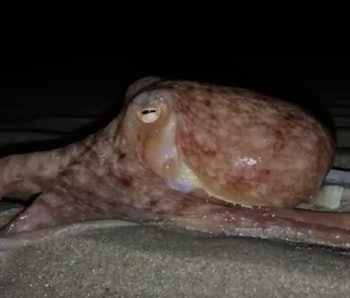 Over the last few days, an entourage of octopuses has been emerging from the ocean and crawling along a remote beach in Wales. The rare display, which was described by one onlooker as an “end of days scenario,” could be a sign that there’s something wrong with this particular group of octopuses — or that they’re just sick of humanity’s shit.

Brett Stones, owner of SeaMor Dolphin Watching Boat Trips, says he saw up to 25 curled octopuses casually strolling around New Quay beach on Friday night. Though he was confused by the understandably alarming situation, Stones helped return some of the octopuses to the sea.

“It was a bit like an end of days scenario,” Stones tells the BBC. “There were probably about 20 or 25 on the beach. I have never seen them out of the water like that.”

Curled octopuses (Eledone cirrhosa) are common in the waters around the British Isles. While they’ve been spotted slinking around Ceredigion beaches before, experts say the sheer volume of this octopus posse is unusual.

“As the areas where they are exhibiting this odd behavior coincides with the two areas hit by the two recent low-pressure depressions and associated storms of Ophelia and Brian, it could be supposed that these have affected them,” James Wright, curator at the National Marine Aquarium in Plymouth, tells The Telegraph. “It could simply be injuries sustained by the rough weather itself or there could be sensitivity to a change in atmospheric pressure.”

While we don’t know exactly what’s up with these octopuses, we can only hope that they’ll find some peace soon. On the other hand, if they’re plotting a revolution to unseat humanity and this is just the first step, they have my full support.