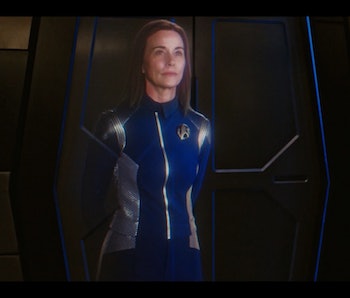 For a casual viewer, Star Trek: Discovery is full of new, bold characters pushing up against the dark edges of the Final Frontier. But for superfans, some of these characters might have hidden identities. While some theories seem more plausible than others, there’s a new deep-cut notion that says one Discovery character will literally become a character from the original series.

Possible spoilers for Star Trek: Discovery are below.

The sixth episode of Discovery was called “Lethe,” which many (including this writer) speculated might reference a character of the same name from the original series episode “Dagger of the Mind.” However, that turned out to be untrue when the episode actually aired. Or did it? One fan, Justin Oser, has pointed out that Lethe and Admiral Cornwell could be the same person.

Here’s the reasoning: In the original series episode, Lethe was a brainwashed former inmate working as a therapist at a Federation penal colony. The reasons for her being at the penal colony in the first place were a mystery. When Captain Kirk asked about what she was in for, she dodged the question. Now, because Discovery takes place about 10 years before the events of “Dagger of the Mind,” Oser postulates that Lethe was once Admiral Cornwell but has had her memories entirely erased of her previous life.

While this sounds crazy at first, there are a few striking details that lend credence to this theory. The name of the episode is an obvious clue, which could be written off as a coincidence, but it seems too on-the-nose to be an accident. Also, in this episode, Cornwell alludes to the fact that she started her Starfleet career as a therapist, which is what Lethe becomes at the insane asylum in “Dagger of the Mind.” Finally, because the episode ends with Cornwell being captured by the Klingons, it’s possible when they give her back to Starfleet she’s gone totally insane. In the original episode “Errand of Mercy,” we learn the Klingons have a brain-torture device called the Mind-Sifter. Kor also calls it a “Mind-Ripper,” and though Spock is able to withstand it, it might drive a human crazy.

If all of this turns out to be legit, then it’s possible that when Cornwell returns she’ll be totally insane, possibly to the point where she needs to be locked up — which will turn out to be very convenient for Captain Lorca. The last time these two saw each other, Cornwell threatened to take away his captaincy. But if she’s driven insane by the Klingons, maybe that will never happen.

Of course, all of this could be totally wrong, and Cornwell might escape unscathed. Because if Discovery has taught fans anything so far, it’s that each episode is almost never what we expected.

Star Trek: Discovery airs on Sundays at 8:30 p.m. on CBS All Access.

Read Next: Rainn Wilson Explains Why ‘Star Trek’ Is Smarter Than ‘Star Wars’