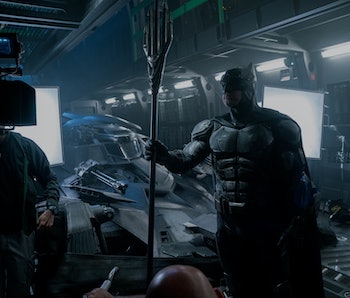 Fans of the DC Universe are about to get the big screen adventure they’ve been waiting for in Justice League. But a new photo from director Zack Snyder reveals something is just a bit, well, off.

On Wednesday night on Vero, the obscure social networking platform Zack Snyder has quietly been posting behind the scenes pictures from the Justice League set, Snyder uploaded a batch of new pictures. “Love this team of truly lovely people,” Snyder wrote. “Wish them all the best in China.” (The film’s promotional tour in China begins this week.)

Among the coolest pics Snyder uploaded is of Ben Affleck, fully suited as Batman in the new tactical armor, holding Aquaman’s trident. It’s a cool photo! But, um, have you guys noticed that Aquaman’s trident has four prongs? Therefore, not a trident?

Look, it’s no big deal, and really these are neat photos. And Aquaman, played by the beefy Jason Mamoa, has long ago shown off his four-pronged trident (quadrent?). But as Justice League fast approaches, it’s just kind of amusing that the DC movie universe is that much more hardcore, it gave an extra prong to Aquaman. Well, if it protects Atlantis…

Meanwhile, Snyder’s other photos are just as cool, where he leads Ray Fisher, who plays Cyborg, in a scene before he becomes a superhero, and rehearses with Gal Gadot, who is dressed as her now iconic Wonder Woman. See the photos below.

Justice League will be released in theaters on November 17.