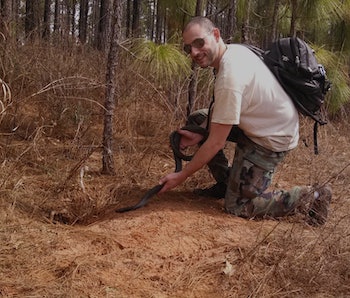 If Twitter were to canonize a patron saint of snakes, there’s no better candidate than David Steen. Unlike St. Pat, the apocryphal staff-wielding Irishmen, the Auburn University wildlife ecologist is decidedly pro-serpent, reintroducing indigo snakes to Alabama, where the species hasn’t been seen in 60 years, and keeping the Internet up to date on all things slithery via his Twitter feed, @AlongsideWild. His bright idea is big, but uncomplicated: Give people a reason to appreciate snakes and they’ll stop killing them with shovels.

“My overall goal is to encourage an appreciation for the natural world,” Steen told Inverse. “We have to start in people’s backyards.” When that’s not practical, the wilds of social media will suffice.

Steen’s Twitter feed began as a way to promote his blog, but about two years ago Steen found himself scanning Tweetdeck for people who had incorrectly identified a serpent species. He started to message them, correcting their IDs and talking enthusiastically about the animals he loves. It wasn’t long before he was chatting regularly with people from all walks of life, farmer and fishers and Lennox Lewis and Bubba Sparxxx. In fact, Steen’s conversation with Sparxxx might just be the most pleasant discourse in the brief history of hip-hop ecology.

Bubba, it turns out, made a common mistake. People seem particularly prone to believing harmless snakes are Copperheads, Cottonmouths, or Water Moccasins. It’s survival instinct — better safe then dead — but it isn’t helping snake species survive. “This is just a guess,” Steen says, “half of the snakes people say are copperheads aren’t copperheads.” That insight birthed the hashtags #NotACopperhead and #NotACottonmouth, ruining some otherwise harrowing stories, but also saving some serpents.

The responses to Steen’s efforts have been mixed. When Twitterers wonder about what type of snake they’ve photographed, “they’re delighted to have a snake expert come out of nowhere,” Steen says, adding that he loves to get responses along the lines of “I used to be afraid of snakes, now I’m learning and I’m not afraid.” For Steen, the goal is to make ecology personal and to fight the idea that mother nature is out to get us.

“Snakes are just animals like any other animal. They’re not dangerous if you use common sense,” he said. “They’re not killing machines.”

Twitter being Twitter, Steen has been called “creepy” a fair amount. He’s a snake person and people are sometimes unnerved by snake people. “I have had to develop a thick skin,” he says, describing himself as an “emotionless, non-judgmental source” of information. He’s coldblooded and fine with it. The unfortunate flip side of being guarded is that Steen doesn’t exactly revel in the opportunity to call out Ted Nugent when America’s insane uncle gun-nuts himself over a dead 9.5-foot-long rattlesnake. Maybe he should.

Yes, citizen science and education are important to Steen — but it’s all done in service of the snakes themselves. “People out there, they’ll see things I’ve never seen: prairie king snakes and mole king snakes,” he said. “It breaks my heart when they think, ‘Copperhead!’ and then kill them.”

Now Steen’s techniques are being adopted by the conservation Twitterverse. The hashtag started by Canadian arachnologist Catherine Scott? #NotABrownRecluse.

The Internet remains a scarier place than our backyards.