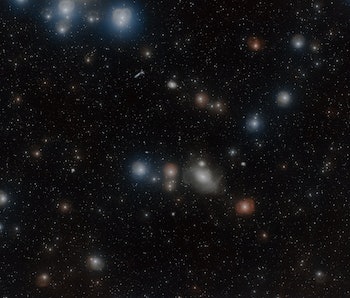 Space is the ultimate slice of humble pie; it has a way of making a person feel small and insignificant, because within the context of the universe, they are. Now, the European Southern Observatory (ESO) has released the mother of all humbling images: a spellbinding new look at the famed Fornax Cluster.

Despite sounding like a rejected Dr. Seuss character, the Fornax Cluster is actually pretty remarkable. It’s an amalgamation of galaxies located about 62 million light-years from us, which is actually considered pretty close to the Milky Way.

In this 2.3-gigapixel image, taken by the VLT Survey Telescope (VST) at ESO’s Paranal Observatory in Chile, viewers get an unprecedented look at this dynamic cluster and its many quirks, including a particularly bright galaxy known as NGC 1316.

According to the ESO, NGC 1316 has an interesting past — it was apparently formed after several tiny galaxies clumped together. These mergers left behind a supermassive black hole in the center of the galaxy about 150 million times the mass of our sun. Like I always say: there’s nothing like a massive void within an even more massive void to make you feel small and insignificant.

In case you haven’t quite had your fill of existential despair, here’s a closer look at NGC 1316 and its neighbor, NGC 1317. You’re welcome for the new desktop background:

We hope you don’t feel to bummed after marveling at the majesty of these images. We’re all made of star stuff, right? Sadly, we’re also made of character flaws and undesirable personality traits that these distant galaxies will thankfully never have to encounter.

Ever wonder how the Guardians travel so dang fast? Check out this video on an expert guide to wormhole travel in Guardians of the Galaxy Vol. 2, according to a theoretical physicist.

More like this
Science
16 hours ago
JWST will unlock the mysteries of these 7 peculiar exoplanets
By Jennifer Walter
Science
15 hours ago
Webb Telescope will take aim at one of Hubble's most iconic targets
By Georgina Torbet
Science
20 minutes ago
This "city killer" asteroid won't hit Earth after all
By Andrew Moseman
Related Tags
Share: