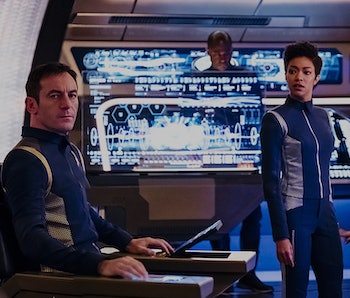 Sunday’s episode of Star Trek: Discovery found the show seemingly diversifying its focus, with multiple characters getting ample time in the spotlight. Discovery Episode 6, “Lethe,” is a classic demonstration of the principle that everyone is the hero of their own story – or, maybe that’s just what it wants you to think. Nonetheless, Discovery is striving to give ample screen time to characters who would normally exist at the fringes.

Case in point, “Lethe” explores the relationship between Michael Burnham and her adoptive father Sarek. With the Vulcan ambassador dying in the wake of an assassination attempt by a logic extremist, Burnham finds her and Sarek’s katra connection repeatedly drawing her into her adoptive father’s memory of the day her application to join the Vulcan Expeditionary Group was denied.

Understandably, Burnham assumes this memory is about how much she disappointed Sarek – if, indeed, Vulcans are capable of disappointment. But newly added crew member Ash Tyler has it right when he says people in their final moments don’t dwell on how others let them down.

As Burnham discovers, the day was, in fact, Sarek’s failure, as he was forced to choose which of his two not-quite-Vulcan children – Burnham or Spock – would be allowed to join the Expeditionary Group.

What makes this plotline work is the decision to crowbar Burnham into one of the most well-explored families in Star Trek history. Fans’ familiarity with Spock has given him sufficient weight as a character, even when he remains unseen, so the stakes feel alarmingly real when Sarek has to pick between him and Burnham. The fact that anyone with even the most passing familiarity with Star Trek knows Spock chose Starfleet over the Expeditionary Group just twists the knife further, even before Sarek explicitly spells out the irony.

The ambassador himself is also sufficiently established from his 50 years’ worth of appearances, allowing him to be more than just a source of pain for Burnham – we can also understand this in terms of Sarek’s own larger dream of bringing humans and Vulcans together.

This ability to shift which character commands narrative focus is hardly unique to Discovery, of course, but this latest episode of the series is particularly strong in this regard because Burnham isn’t the captain. She’s the protagonist for the simple reason the story happens to be primarily about her, not because she’s the captain around which the show’s featured corner of the Star Trek universe is organized around.

This is one of the essential paradoxes of Star Trek: The franchise imagines a utopian future, yet we only ever see that egalitarian world through the rigid hierarchy of a starship crew. Discovery has upended that by making Burnham the main character instead of Captain Gabriel Lorca. A more traditional version of this show would be built around him, with Burnham’s rich arc as reformed mutineer struggling with her past positioned more like, say, Major Kira’s on Deep Space Nine — as something that is parallel yet ultimately subsidiary to the captain’s story.

That’s not to say Lorca doesn’t demand attention. His storyline in “Lethe” barely intersects at all with Burnham’s, apart from when he benevolently “okays” the rescue mission and explains at the end that he did all this not for Sarek but for her. Instead, the bulk of his story in “Lethe” relies on his relationship with Admiral Cornwell and his efforts to keep the captain’s chair despite all the entirely valid questions Cornwell raises about his fitness to command.

Exactly what’s wrong with Lorca remains an open question, but “Lethe” is careful to not push him into irredeemable territory. He has his secrets and his ready-made excuses, and he is unnervingly manipulative as he uses Cornwell’s feelings for him to his advantage, keeping her suspicions at bay for as long as possible. But his suddenly by-the-book decision to not rescue Cornwell after her capture, which conveniently lets him keep command of the Discovery, makes sense in the context of his playing the proverbial, well-intentioned extremist.

It’s still possible to read all his actions as those of a fundamentally good person who has simply lost perspective in his drive to win the war. Darker interpretations are certainly possible, but the show isn’t yet ready to reduce Lorca to anything as simple as hero or villain. Given Jason Isaacs’s talent for playing the ambiguity between those extremes, that decision makes a lot of sense. Either way, though, Lorca is no mere supporting character — he’s the protagonist of his own, elusive story, one that Burnham has little idea of.

But not that every last character in “Lethe” gets to play the hero. Ash Tyler, in particular, gets put in his place rather coldly as he gets set to pilot the shuttle into a radiation-choked nebula. He has what he takes to be a bonding moment with Lorca, as the captain tells him to bring her back safe — Tyler promises the shuttle won’t have a scratch on her, but Lorca corrects him by making it clear he’s talking about Burnham, and that he’s not really all that worried about anyone else.

Discovery isn’t without some sense of hierarchy, then, a point underlined by Cadet Tilly’s little subplot. The show returns once more to her overarching goal, which is to become a captain. That’s a sensible enough goal for a Starfleet officer, but it emphasizes that the best way to become the hero of one’s own story in this universe is to make a beeline toward the captain’s chair. As Burnham emphasizes to her roommate, there’s no one path to that destination, but it doesn’t alter the overwhelming fact that a captain title is where characters probably ought to be heading if they want to play the hero.

And that, again, speaks to the central, most fascinating tension of Discovery. It’s one thing to have a captain who is not the main character. It’s something still more unnerving to have a captain we, the audience, cannot entirely trust, especially when the characters under Lorca’s command have found little reason to doubt him so far.

While the show’s focus may be on Burnham, Discovery hasn’t altered the fundamental power structure of Star Trek, which has always held the captain as the most powerful character. Lorca is de facto dictator on board Discovery and, as he points out to Cornwell, captains are free to operate and make decisions in a way that theoretically more powerful admirals cannot.

In episodes like “Lethe,” it’s easy to get sucked in by the illusion of narrative equality, one in which Lorca, Burnham, and Sarek are on equal footing. But it’s a mirage, as evidenced by the basic fact that nothing in this episode – give or take Sarek’s initial mission – happens without Lorca’s permission. For now, he’s a magnanimous leader, but he holds the power to reconfigure Discovery’s entire narrative setup whenever he wants.

Tyler experienced that firsthand when he was deprioritized in favor of Burnham, and it’s only a matter of time before our hero learns once more that her concerns – her issues with her father very much included – take a backseat to whatever the Discovery’s captain has cooking.

Star Trek: Discovery is airing the first chapter of its first season on Sundays at 8:30 p.m. Eastern on CBS All Access.

If you liked this article, check out this video on why the Klingons look so different in Star Trek: Discovery.