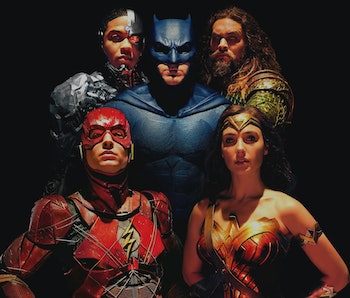 Many assumed that the big villain Steppenwolf would only be focused on two things in Justice League: some manner of world domination, and fighting some superheroes. But as it turns out, the Apokoliptian baddie could have an unexpected agenda in the film.

On Sunday, Reddit user Spartansfan23 posted a photo excerpt of the “Meet the Justice League” issue of Hollywood Spotlight, giving us some hints as to what Steppenwolf is planning. “According to the actor [Ciaran Hinds], in the film, Steppenwolf is old, tired, and trying desperately to get out from under the servitude to his nephew. That Herculean task might require some help from a superpowered team.” (Earlier in the same excerpt, Steppenwolf is confirmed to be Darkseid’s uncle.)

While this could always mean an unlikely team up between the villain and the League occurs, it seems far more likely that the character will want to to manipulate them into doing his bidding (the Apokoliptian way). This could be why Superman’s been kept off of the film’s main posters, and why composter Danny Elfman said on September 28 that there’s a “dark” moment where Superman’s allegiances aren’t clear. He could be twisted by Steppenwolf to be used as a weapon against Darkseid, which the article calls the “universe’s greatest villain,” with the hope that the rest of the League would follow suit to help their friend.

No matter what role Superman ends up playing in the film, though, it’s exciting to see that Justice League may start weaving in the dangerous politics of Apokolips.

Justice League is scheduled to be released in the US on November 17.

More like this
Entertainment
Feb. 1, 2023
DC’s New Secret Weapon is Director-Driven "Elseworlds" Movies
By Eric Francisco
Entertainment
Jan. 26, 2023
Shazam! Fury of the Gods trailer pits the family against Helen Mirren and her dragon
By Mónica Marie Zorrilla
Entertainment
4 hours ago
Superman: Legacy Will Reinvent the Man of Steel — Everything to Know
By Eric Francisco
LEARN SOMETHING NEW EVERY DAY.
Related Tags
Share: