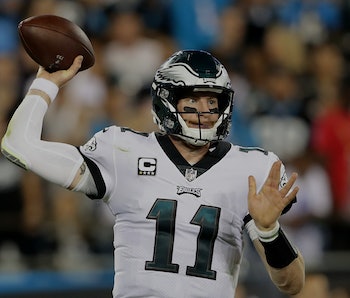 The Philadelphia Eagles are the only team left in the NFL with just one loss as they head into their divisional tilt against Washington. A win Monday night could establish them as the team to beat as the season nears its second half. A hive mind of about 30 NFL fans predict the Eagles will do exactly that, picking them to win Monday.

Don’t sleep on Washington, though. They come into the game at 3-2, but their losses are to the Eagles in the opening week and to the Kansas City Chiefs, which is also the only team to beat Philly so far this year. Taking out the one game they played against each other, Washington and Philadelphia are 0-2 against the Chiefs and 8-0 against everyone else.

The swarm has little doubt in Philadelphia, picking them to win with high confidence and 84 percent brainpower behind the pick.

The addition of a 4.5-point spread makes the hive mind a touch more hesitant, but it still picked the Eagles with high confidence, and only a slightly smaller 79 percent collective brainpower behind the choice.

More like this
Mind and Body
5.7.2022 12:00 PM
Barbell exercises might not work for everyone – here’s what to do instead
By David Rogerson and The Conversation
Innovation
8 hours ago
China and Russia are on track to set up a Moon base by 2036 — here’s the plan
By Allie Hutchison
Innovation
5.18.2022 6:37 PM
One simple thing makes the Nissan Z a perfect sports car
By Jordan Golson
Related Tags
Share: