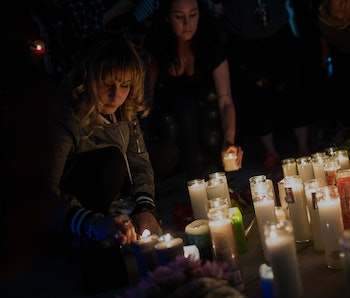 It seems like there’s a mass killing every week in the United States — or even more often, depending on how closely you follow the news. And the more of them that happen, the easier it is to feel like each killing makes the next one that much more likely. But according to researchers who have combed through a decade of news reports on the matter, mass killings have occurred steadily for a decade, and one doesn’t seem to have much effect on the next.

In a study published October 10 in the journal Violence and Victims, Douglas King, a senior lecturer of industrial and enterprise systems engineering and Sheldon Jacobson, a professor of computer science, both at the University of Illinois at Urbana-Champaign, analyzed the time distributions of 323 mass killings between 2006 and 2016 and found that mass killings occurred at a stable rate throughout the 10-year period — about once every two weeks.

“We hear a lot on Facebook and in the media about mass murder. People often think that these are more prevalent, but the data just doesn’t support that,” Jacobson tells Inverse. “They’ve been consistent for over a decade.”

Beyond the overall frequency of killings, Jacobson and King also looked at the distribution of different subsets of mass killings — family killings, public killings, and so on — and found that the distribution suggested a quality known as “memorylessness.” This quality describes a pattern in which one mass killing does not seem to trigger another one soon after it, or if it does, the effect is quite small. To put it another way, there’s no certain amount of time from one killing to the next.

To conduct this research, Jacobson and King compiled information about mass killings between January 1, 2006 and October 4, 2016, as reported in USA Today. They mapped the relative times these events occurred and determined that the distribution of all 323 reported mass killings was nearly even over the decade. They then divided the events into subsets that took into account the particular circumstances of the killing. These included both killing type (public, family, burglary, and other) and method (shooting, stabbing, and so on). They compared the distribution of killings within these subsets, with some events falling into multiple sets, and found that no particular type of killing seemed to accurately predict or trigger the next one that occurred.

This property, which the researchers describe as the memoryless nature of mass killings, means that another shooting is just as likely to happen one day after a shooting as it is to happen 5 days after. In other words, this research seems to dispel the hypothesis of the “copycat” phenomena or contagion effect, and there is basically no way to guess when another mass killing will occur.

This is all very grim, but Jacobson tries to be optimistic.

“The most reassuring thing is that even though we hear so much in the media, things may not be getting better, but they’re not getting worse,” he says.

Jacobson says he hopes identifying these patterns will inform public discussion and policy in two main ways regarding how we handle these events. The first is public education so people know when something is about to go down. The second is law enforcement preparation so they can respond quickly and effectively.

“You can’t simply put guards at every sporting event or entertainment venue,” Jacobson says. By being aware of the limitations of policy and law enforcement efforts, Jacobson hopes that the damage from these events can be minimized. “It doesn’t mean we can eliminate it, but we can keep as many people safe as possible under the circumstances.”

He emphasizes that this paper’s most significant finding is that mass shootings have, for better or for worse, remained relatively stable for the past decade. As Inverse has previously reported, it’s easy for media reports of mass killings to make them sound more common than they are. This is not in any way meant to downplay the gravity of these events, but simply to say that there are many more likely ways for you to die.

“Approximately 90 people per day are killed on the highways in the United States,” Jacobson says. “The irony would be if you add up the 323 mass killings that have occurred over the last 10 years and nine months, the numbers would be comparable.”

More like this
Science
Oct. 1, 2022
Ancient humans forged hybrid species at critical periods in our evolution
By Penny Spikins and The Conversation
Science
Sep. 24, 2022
Is a fact always true? A philosopher explains how to spot the difference
By Peter Vickers and The Conversation
Science
Sep. 22, 2022
Can science prevent a pandemic?
By Tara Yarlagadda
Related Tags
Share: