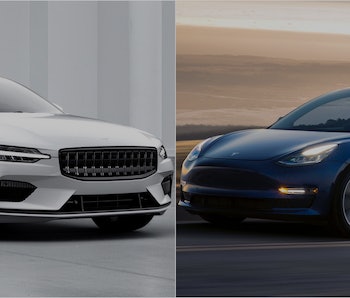 Tesla has some big competition on its hand. Volvo’s Polestar has just unveiled its first vehicle, the aptly-named Polestar 1.

Although this first model is a plug-in hybrid, it lays the foundations for future fully electric cars that could give those looking for an affordable electric car an alternative to the Tesla Model 3.

“All future cars from Polestar will feature a fully electric drivetrain, delivering on our brand vision of being the new standalone electric performance brand,” Thomas Ingenlath, Polestar’s chief executive officer, said in a statement. An all-electric Polestar 2 will enter production at the end of 2019, followed by an SUV-style Polestar 3 electric vehicle.

Both Polestar and Tesla are aimed at enticing consumers into the realm of electrification. But where the Tesla Model 3 starts from $35,000, with optional extras pushing the price up further, Polestar has gone for a unique approach where consumers subscribe to a car for two to three years, with maintenance and insurance covered as part of the fee. This is the only way to get your hands on a Polestar, and the price is currently unknown.

In the Polestar, two electric motors generate 218 horsepower by themselves. A rear-axle battery combines with a transmission-based battery pack to offer 93 miles of electric range. The company claims it is the longest full electric range of any hybrid car on the market.

The Polestar 1, a 600 horsepower coupe, is the first step toward vision. Set to hit the roads in the middle of 2019, the vehicle will arrive around the same time as the first right-hand drive models of the Tesla Model 3. The latter vehicle can hold its own in the performance space, offering acceleration from 0-60 mph in just over five seconds.

Like the Tesla Model 3, the Polestar 1 offers the ability to unlock the car through an app, but the two implementations differ somewhat. In Tesla’s system, the user can also switch to a keycard. With the Polestar, users can transfer the virtual key to a third party to share the car around.

Both cars are going to be in high demand, but the Polestar 1 may prove even more a rarity than the Model 3. While Tesla only produced fewer than 1,000 cars in the first quarter of production, Polestar plans to produce just 500 vehicles per year in this first iteration. It’s a small start, and it’s going to take a while before the brand starts to become visible on roads. Baby steps.