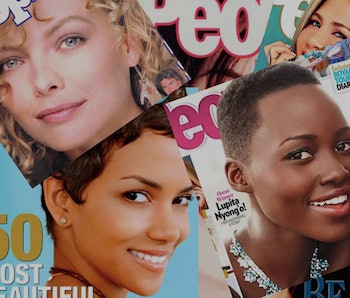 Since the early ‘90s, who we think is beautiful has changed. According to a new study, the definition of beauty has been extended to encompass older people and more racial diversity than ever before. At least when it comes to celebrities.

Researchers compared People magazine’s “World’s Most Beautiful” lists from 1990 and 2017, where editors list the world’s “most beautiful” celebrities using input from readers and agents. The study, published in the JAMA Dermatology journal, found that the people in the 2017 list had darker skin tones, were around 5 years older on average, and were overwhelmingly women.

However it’s important to look at the details of the study and not just take their conclusions at face value. People magazine’s readers, who contribute to the decisions on the list, are overwhelmingly white (73%) and affluent. The editors who finalize the list are not much different. The media as a whole is often criticized for its lack of diversity, and a 2017 survey shows the percentages for women and minorities in newsrooms have not really changed in recent years. The sample size — Hollywood — that the list draws from is also dominated by the most affluent in society, who are, again, very white.

Additionally, the progress researchers noted is there, but it’s by a slight margin over almost 20 years. They evaluated celebrities’ skin tone using the Fitzpatrick scale, which classifies skin type from one (pale) to six (dark brown). In 1990, 12 percent of the celebrities had skin types IV to VI, while 29.6 percent of list members had the darker skin types in 2017. The average age of celebrities was 38.9, compared with 33.2 in 1990.

So remember to add a grain of salt to the conclusion that “beauty standards are evolving as people learn how to integrate the effects of media with exposure to new cultures and different norms.” The results also showed that only five celebrities in total from both lists had “any visible skin condition or lesion that marred the even distribution of texture and/or color,” so the idea that beauty means unblemished skin has not changed.