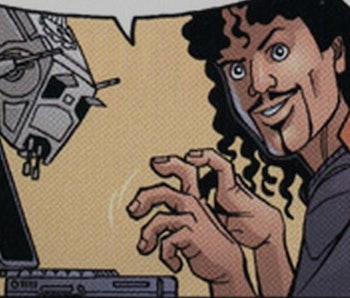 The Rosencrantz and Guildenstern of that galaxy far, far away have returned. Two hapless guys named Tag and Bink — who first appeared when Dark Horse Comics was still publishing Star Wars comics in 2001 — will become part of a Star Wars canon when they appear in the upcoming Han Solo movie directed by Ron Howard.

On October 14, Howard posted a picture to Twitter with two men dressed as Imperial Officers with the caption “#tagandbink?” This references a series of tongue-in-cheek comedic stories published by Dark Horse Comics which insinuated two regular guys — Tag and Bink — into almost every major event in the original Star Wars trilogy, and then later, into the prequel trilogy too. After nearly dying as Rebel soldiers aboard the Tantive IV in A New Hope, Tag and Bink disguise themselves as Stormtroopers, and begin a career of trying to simply get by in a variety of circumstances. Turns out, these guys were not only Vader’s wingmen in the Battle of Yavin, but also briefly impersonated Boba Fett, stole Chewbacca’s medal, and had a brief stint as Imperial Guards for the Emperor. As children, they were also responsible for accidentally deleting info from the Jedi Temple Archives. In other words anything that seemed fucked-up about Star Wars, probably had Tag and Bink somewhere in the background.

The writer and creator of Tag and Bink — Kevin Rubio — told Inverse he was “Completely oblivious,” about the upcoming reference until “Ron Howard tweeted Saturday.” Since then, co-screenwriter Jon Kasdan confirmed on Twitter that these are indeed Tag and Bink, and they will be portrayed by himself and assistant director Toby Hefferman.

Rubio says his inspiration for creating Tag and Bink originally came from the Alan Dean Foster novelization of the first Star Wars movie: “I’ve always thought Princess Leia summed it up best in the Star Wars novelization forward: ‘They were in the wrong place at the wrong time. Naturally, they became heroes.’” And though the title Tag and Bink Are Dead cheekily references Tom Stoppard’s Hamlet homage Rosencrantz and Guildenstern, Rubio had a different inspiration in creating them. “They are my brothers if they are anybody,” he says.

Rubio also suspects that Tag and Bink have crept back into the Star Wars fan zeitgeist because of their ability to provide the connective tissue between certain aspects of the overall Star Wars universe. “Maybe it has something to do with Star Wars fans peculiar desire to have a backstory on every character that appears for more than a second on film,” he says. “Or the fact that most people don’t like plot holes and loose ends and Tag and Bink help answer some of those questions.”

The as-yet-untitled Han Solo movie, now featuring at least one cameo from Tag and Bink, will hit theaters on May 25, 2018.