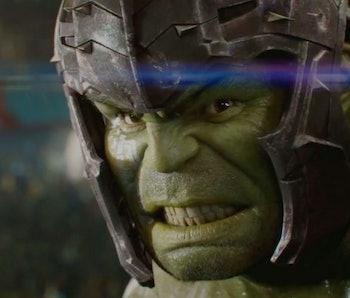 The Hulk has only been the star of one film in the Marvel Cinematic Universe, 2008’s somewhat forgettable Incredible Hulk, and due to some legal complications, he’s probably not going to get any standalone films in the future. But, Marvel has a workaround for the Hulk. According to Mark Ruffalo, there’s going to essentially be Hulk movie split up in three upcoming MCU films.

CinemaBlend spoke with Ruffalo, who has played Bruce Banner/the Hulk since The Avengers, and he revealed that he and Marvel Studios boss Kevin Feige had worked out a trilogy of sorts for the character. In lieu of a standalone movie, the Hulk’s story will span across Thor: Ragnarok, Avengers: Infinity War, and Avengers 4, which doesn’t have a formal title yet.

So basically, Kevin [Feige] pulled me aside before this, and said, “If you were gonna do a… if we were going to do a standalone Hulk movie, what would it be?” And I said, “I think it should be this, this, this, and this and this, and ends up like this.” And he’s like, “I love that. Why don’t we do that in the next three movies, starting with Thor 3 and then we go into Avengers 3 and 4.” And I was like, “That sounds great!” And so we are at the beginning of this arc.

When we last saw the Hulk, he was flying away from the team — especially Black Widow — at the end of Avengers: Age of Ultron. How he got to the gladiator planet Sakaar, and how he’s been doing since, will probably be the focus of the first third of his story, as seen in Ragnarok.