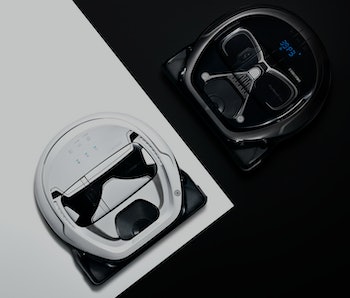 Samsung is enticing fans to the dark side with the promise of clean floors. The limited edition “POWERbot” robot vacuum cleaner, unveiled the day after the Star Wars: The Last Jedi trailer was released, comes in both Darth Vader and Stormtrooper designs.

For Star Wars fans, it’s going to be hard to go back to a regular cleaner. The $799 machine is a redesigned version of the VR7000, which uses Visionary Mapping Plus and FullView Sensor 2.0 to build up an image of how a room looks, with the ability to maneuver around objects as small as 0.4 inches. It offers integration with the Amazon Alexa and Google Assistant artificial intelligence helpers. Oh, and it plays Star Wars sound effects.

“Not since R2-D2 projected Princess Leia’s plea to Obi-Wan in A New Hope has a droid, I mean robotic vacuum, captured my heart this much,” Nicole Cammorata said in her review for Mashable. “I’ve never felt this kind of adoration about a vacuum before. (And yes, I know how weird that sounds.) But when I turned on the POWERbot and it launched into the iconic notes of the (Star Wars* Main Theme, I had to giggle with delight — and many of my coworkers did the same.”

Both bots have their own special selection of sound effects. The Stormtrooper edition, for example, starts the clean by saying, “Let’s go!” The Darth Vader machine, on the other hand, makes lightsaber sounds and breathes heavily.

The machines can also make short work of house floors, thanks to a 290 millimeter brush and a 10 watt suction capacity. Overall, it delivers around 20 times the suction power of the previous generation in a machine just 3.8 inches high.

It’s cool, but in the world of robots bigger things are on the horizon. At this stage, Roomba developer iRobot claims around one in five vacuum cleaners are robots, as the concept has slowly filtered its way into living rooms since it was first introduced in 2002.

In the future, house robots could take on even more tasks. Boston Dynamics has developed a quadrupedal robot capable of picking cans up off the floor and placing them in the garbage. It’s early days, but it could lead to an all-singing, all-dancing butler that eliminates house chores for good.

Then again, if you need your house bots to make lightsaber noises, the Samsung is probably the best option for now.