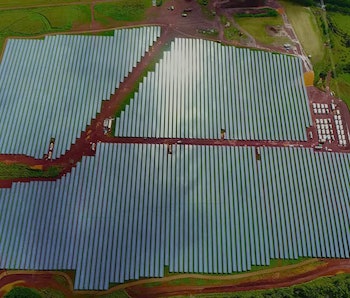 The governor of Puerto Rico has signaled his support for Elon Musk’s plan to use solar to restore power to the hurricane-stricken island. On Friday, Governor Ricardo Rossello made plans over Twitter to speak with the Tesla CEO further, describing the idea as potentially turning into the company’s “flagship project.”

Just one day prior, Musk outlined an idea to restore power to the island, parts of which are expected to spend the next four to six months without energy after Hurricane Maria. Tesla has already shipped Powerwall batteries to Puerto Rico, but Musk’s plan to use solar to get the whole island back online would be something altogether more ambitious.

“The Tesla team has done this for many smaller islands around the world, but there is no scalability limit, so it can be done for Puerto Rico too,” Musk said on Twitter Thursday. “Such a decision would be in the hands of the PR govt, PUC, any commercial stakeholders and, most importantly, the people of PR.”

Rossello jumped in to see whether Musk would be open to further discussion.

The governor agreed, stating that he had “no doubt” the two could work together.

If the plan comes together, it would greatly surpass Tesla’s previous projects in terms of size. The company has completed similar systems for five islands: Kauai and Oahu in the state of Hawaii, Ocracoke Island in North Carolina, Ta’u in American Samoa, and Malolo Island in Fiji. But while Kauai is the largest, with a 13-megawatt solar farm supplying a tenth of the island’s power for 65,000 residents, Puerto Rico would be on a whole other scale, with its 3.5 million residents requiring around 5,000 megawatts.

It’s possible that Musk is right, and the scale of the project means little about whether it can be done. But if he’s wrong, it could prove a costly mistake at a time when Puerto Rican residents need concrete solutions. Only around seven percent of residents have power, and Rossello claims it could take a month to restore power to even just a quarter of households.

If you liked this article, check out this video of a man-made island that could power 80 million Europeans with clean energy.