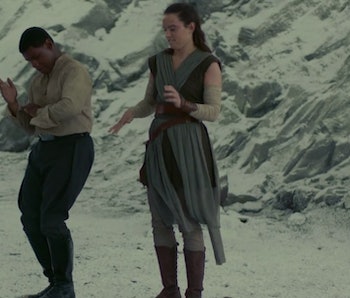 You might be able to start preparing for Rey’s training stint with Luke Skywalker this next week. Rumors indicate that tickets for Star Wars: The Last Jedi will go on presale on Monday.

As pointed out by Screenrant, fansite Furious Fanboys editor Jeremy Conrad took to Twitter on Wednesday to report that AMC Theaters and Regal Cinemas have, supposedly, been preparing to put Last Jedi tickets on sale as early as this coming Monday, October 9.

There is absolutely no confirmation of this from either Disney or Lucasfilm, though, so don’t get your hopes up too high.

Also unconfirmed are rumors spurred on by Luke Skywalker actor Mark Hamill that the next official trailer for Last Jedi would premiere during Monday Night Football on October 9. Hamill later claimed ignorance to the trailer premiere date, but that didn’t stop eager fans from calling bullshit.

If the trailer does premiere on Monday, then it would make sense that Lucasfilm and Disney might tie the presale of Last Jedi tickets to said trailer.

But this is all still speculation. Don’t get too excited yet.