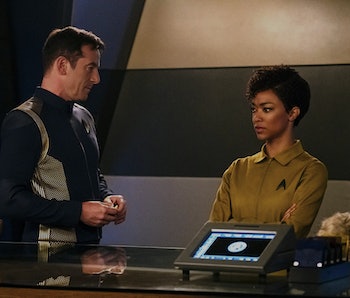 The third episode of CBS’s Star Trek: Discovery, “Context Is for Kings,” introduced Jason Isaacs’ Captain Gabriel Lorca and, finally, the titular U.S.S. Discovery. But Lorca and his crew are up to some suspicious stuff; namely, they’re masquerading as a science vessel while really conducting top-secret experiments. Starfleet is trying to perfect a new propulsion system to give the United Federation of Planets a leg up over the Klingons, and the Discovery crew is responsible for making that happen.

Lorca leads Michael Burnham (Sonequa Martin-Green) into a room off his captain’s ready room, which Discovery producers have referred to as “Lorca’s menagerie.” Viewers are greeted by various alien species, including a single Tribble that could be the downfall of the Klingon Empire and, suspiciously, a Gorn skeleton.

Star Trek first introduced fans to the Gorns in the original Trek series. The Season 1 episode “Arena” saw a species of highly intelligent aliens called Metrons pit Captain James T. Kirk up against a Gorn to see which species would come out on top. Kirk won because of his ingenuity (and fighting skills, obviously), but “Arena” was supposedly the first time the Federation ever encountered a Gorn. Keep in mind that Discovery takes place about 10 years before the start of TOS.

At least, it was the first time the Federation officially encountered a Gorn.

The one big character we’re still missing out on in Discovery is Rainn Wilson’s recreation of Harry Mudd. An infamous smuggler and con artist, Mudd seems the most likely character to provide Lorca with these kinds of black market-level specimens.

And Mudd’s official list of offenses from StarTrek.com, which include “Smuggling” and “Transport of Stolen Goods,” really seem to back up any theories that Lorca could have gotten these specimens from Mudd.

Star Trek fans would probably like to believe that Lorca is well-intentioned and an overall good guy (he is a Starfleet captain, after all), but just because he might be in cahoots with a smuggler doesn’t mean he’s an all-out bad dude; it just means he might be a morally flexible dude.

Lorca might not even know what kind of skeleton he has locked away in his menagerie.