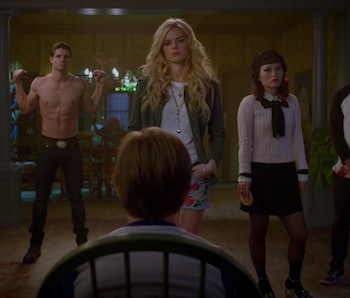 Babysitters stereotypically cause trouble when Mom and Dad leave for the night, but the trailer for Netflix’s upcoming horror flick The Babysitter takes that trouble to a whole new level. Cole’s (Judah Lewis) cool babysitter Bee (Samara Weaving) is a tween boy’s wet drea. She’s also a member of a cult alongside some other hot teenagers looking to go viral.

The Babysitter, an upcoming horror comedy from Netflix and director McG, follows Cole’s attempts to escape the clutches of his babysitter’s cult, which is, like, totally trying to kill him and use “the blood of the innocent” in a ritual.

“Yeah,” Allison retorts, “but, like, not in America with hot people.”

The Babysitter premieres on Netflix on October 13.