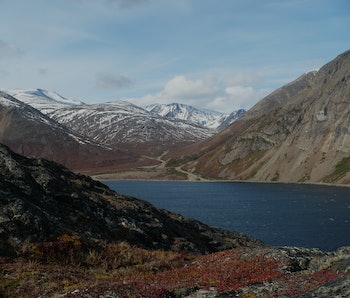 A newly unearthed set of fossils may have just moved back the milepost for when the first forms of life appeared on Earth. A team of scientists from the University of Tokyo studying rock formations in Labrador, the northern region of the Canadian province of Newfoundland, found evidence that life may have formed as long as 3.95 billion years ago — a mere 590 million years after the Earth formed.

This research is outlined in a paper published Wednesday in Nature. In the paper, co-lead authors Yuji Sano, professor of marine analytical chemistry, and Tsuyoshi Komiya, associate professor of geology, explain that their microscopic analysis of the makeup of Labrador’s ancient rocks revealed evidence of early life.

They argue that the deposits of graphite — which is made of carbon — in the rock samples from the Saglek Block formation came from some of the earliest organisms on Earth. The rocks contain a particular mixture of carbon and carbonate isotopes that suggest they were left behind by autotrophic marine microorganisms.

Most graphite is made inorganically as carbon in the Earth’s crust is heated and pressurized to form the distinctively dark silver mineral. But in rare cases, graphite can form through biological means, as microorganisms pile up, die, and are crushed by heat and pressure into rock over time.

Living organisms tend to carry plenty of a specific carbon isotope known as carbon-12, which lingers long after they die. So, when scientists come across graphite that contains a lot of carbon-12, there’s a pretty good chance that it came from living organisms. That was the case here, and the scientists think the organisms that left all that carbon-12 behind might have been autotrophs — which, like modern algae, produce nutrients from inorganic molecules — but it’s still too early to know for sure.

Their next steps? Further analysis of the rocks will hopefully reveal not only what the heck the first forms of life actually were but, more importantly, how they lived — and where they came from.