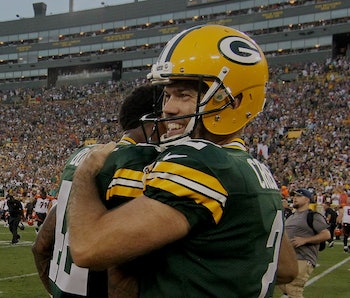 If you don’t own a TV and have no way to watch the CBS broadcast on Thursday of the Green Bay Packers playing the Chicago Bears, Amazon has you covered — as long as you’re a Prime member — and will even offer a feed for you, person who doesn’t know much about football but is interested in learning.

In an email to Recode, Amazon said its stream of the first of ten Thursday night football match-ups this season would include not only English-language commentary, but also these feeds (emphasis ours):

“Amazon is producing live audio tracks for non-English speaking viewers … [including] Spanish, Brazilian Portuguese and even an English language stream that is focused on the educational aspects of the game for those who aren’t familiar with football jargon.”

We’ve reached out to Amazon to find out who came up with this brilliant idea (please let it be Bezos), but even a seasoned fan who does more than watch the Super Bowl may welcome this sort of basic analysis, as the NFL’s rules are changing constantly. Even the league’s own website explains its rules as being “bent not broken,” in a historical review of all the changes.

For the rights to stream ten NFL games on Thursday nights this season, Amazon paid $50 million, five times the amount Twitter paid last season to stream the games on its platform (and for free). The digital-only streaming payment is a drop in the bucket compared to what the NFL gets from traditional networks NBC, CBS, and ESPN, reports the New York Times.

“We are continually looking for ways to deliver our games to fans wherever they watch, whether on television or on digital platforms and we are thrilled to bring Thursday Night Football to Amazon”, said Brian Rolapp, Chief Media and Business Officer for the NFL, after the deal was announced in 2016. “As has been the case with all our streaming initiatives, we look forward to continuing to innovate with our partners as we learn the best ways to serve our fans both this season and into the future.”

Amazon Prime costs $99 a year. The game starts at 8:25 p.m. Eastern, and Prime members can watch it with Amazon Fire TV, or the Fire tablet, or the Amazon Prime video app on your phone. Absent of that, go over to Amazon.com on your computer and watch there. Or, if you have an Amazon Echo Show, you can watch it there.

While an “educational” audio feed is definitely a welcome addition, critics of NFL color commentators have long said the former players and coaches behind the microphones only state the obvious anyway, so we’ve really already had that educational feed. Take the legend, John Madden, for instance. He’s just dropping plain-spoken insight here, in this 1986 broadcast, that all audiences can appreciate, regardless of how big an NFL geek they may be.

Take it away, John:

There’s no word on who will be doing the audio feed, but Madden, age 81 and famously afraid to fly, would probably do a great job educating Amazon Prime-subscribing football novices from his living room. (Please let it be Madden.)

More like this
Innovation
8.5.2022 11:00 AM
Alexa could diagnose Alzheimer’s and other brain conditions — should it?
By Joanna Thompson
Entertainment
8.17.2022 10:30 AM
Rings of Power Season 2 will feature a fan-favorite character Peter Jackson snubbed
By Alex Welch
Entertainment
8.14.2022 12:00 PM
Rings of Power's biggest canon change could ruin one major Tolkien story
By Alex Welch
Related Tags
Share: