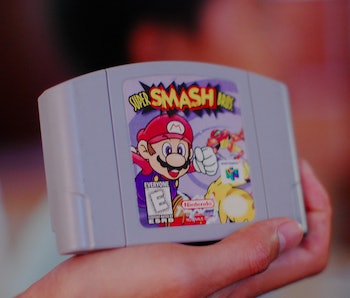 Last week, six video games were elected to the inaugural Video Game Hall of Fame class. Today, the Inverse staff is pulling out which games they think should make the Hall.

Sean Hutchinson: “Blades of Steel” (1988, NES): I’m going to nominate the classic Nintendo hockey game Blades of Steel, the non-NHL-approved video game that was known mostly for how many fights you could get in instead of actual gameplay. My cousins and I played this game so much but I’ve never heard anyone else talk about it, which makes me think that we were the only ones that played it. This probably isn’t the best choice, or anybody’s choice, but it’s my choice.

Eric Francisco: “Shenmue” (2000, Sega Dreamcast): Yu Suzuki’s “Shenmue” is a masterpiece. Beloved only by the hardcore gamers who were lucky to live during the Sega Dreamcast’s lifespan, “Shenmue” should be recognized as a technical achievement. Its lasting legacy, open-world exploration, paved the way for the success of “Grand Theft Auto,” “The Elder Scrolls,” “Assassin’s Creed,” and countless more.

Beyond its technical prowess, thematically “Shenmue” was a beautiful, breathtaking modern fantasy. Its fusion of Japanese and Chinese folk set against a modern, sprawling urban environment colored its classic revenge tale that felt straight out of a kung-fu movie. Its story was part Scorsese, part Kurosawa, and a hint of high school-level Shakespeare. We may never see Ryo Hazuki avenge his father’s death, but we’ll always remember the journey.

Corban Goble: “Super Smash Brothers (1999, N64): My working theory is this — the best game of all time should probably be in the Hall of Fame for games.

Ben Guarino: “League of Legends,” (2009, PC): Riot’s “League of Legends” is neither the first nor only multiplayer battle arena, but since it launched in 2009 it has swollen far beyond the competition to gargantuan size: In 2014, the last time Riot released numbers, it claimed that 67 million people played it every month. At its best, the game’s colorful characters and dance of battleground feints crackles for gamers and spectators alike — sorry, Twitch plays Pokemon, but without “League of Legends” there is no $1 billion Amazon buyout. At its worst, it’s a toxic hive of trolling and rage, not to mention Justin Bieber declaring his love for an assassin fox named Teemo. “LoL” introduced college scholarships to gamers, cosplayers to polyethylene armor, and wrists to carpal tunnel syndrome. It is a game for our time.

Andrew Burmon: “GoldenEye” (1997, N64): “GoldenEye” was ubiquitous in the late nineties and early aughts, a universal way for pubescent males to hurt each other without doing lasting physical damage. As a person who went through puberty eventually I owe a lot to the developers at Rare. Without their handiwork, I presumably would have spent more time beneath people considerably larger than myself. What remains remarkable about the game, which is hot garbage in one player mode, is it’s ability to serve as a stress relief. My fiance and I used to play it instead of fighting. Our relationship is built on lies, but consider how remarkable it is that a decade after its debuts “GoldenEye” remains an easy, relaxing way to shoot someone else in the head. And, let’s be clear, that is the point of the game: killing people in elaborate way. As a pretty crap gamer, I’ve always favored “Power Weapons,” but the kneel and slap strategy remains pretty much unbeatable. GoldenEye proves that completely graceful game design isn’t really necessary. All we really want is to shoot each other. It’s just that simple.

Sam Eifling: “Metroid” (1986, NES): If I were trying to predict what the hall of fame might call up next year, of course I’d pick from the finalists who didn’t make it last year: I suspect that on its merits “The Legend of Zelda” was the hardest for the voters to reject, with “Sonic the Hedgehog” close behind, maybe “Space Invaders” in that mix. Somehow the “Madden” series hasn’t been nominated yet; that won’t last long. We’re still talking early classes in this hall of fame, so maybe we shouldn’t stray too far off the canon: If I had to pick one game to skip to the front of the line, I’ll the case for “Metroid,” the original Nintendo deep-space maze game, which along with “Zelda” one of the first to allow omnidirectional freedom of movement (with no mapping function, in those days) and also one of the most durable franchises in gaming.

Not only was “Metroid” absolutely tough as shit to beat, it instilled an atmosphere of almost Gigeresque Alien-style horror that Nintendo games at the time lacked. Its titular aliens were basically floating, fanged jellyfish that needed to be frozen to be killed; left to their devices, they’d engulf your bounty-hunter protagonist, Samus Aran, and vampire-squid your life force away. Perhaps in another nod to Alien’s Ellen Ripley: Samus was a woman, perhaps the first of her stature as the hero in a Nintendo game, a fact that you learned only during an end-credits sequence when she removed her helmet. This was a surprisingly covert sliver of feminism to inject into shoot-‘em-up gaming for kids in the mid-1980s. Dude, you were playing as a chick the whole time and didn’t even know it.