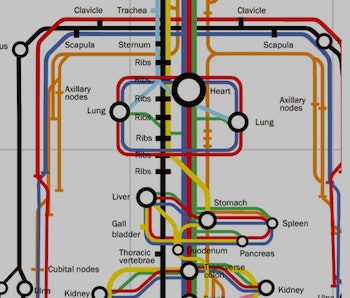 The comparison between the human body and a city has been made before, but upon further reflection by one doctor, the human body more closely resembles the relatively modern concept of “smart city,” a fast-responding internet-connected community that moves information to relevant areas using communication technology — that keeps track of major utilities and lets you know you have enough time in the morning to get a bagel on your way to work.

A fascinating new paper published in The Pharos, a quarterly journal of the Alpha Omega Alpha Honor Medical Society, shows how the human body could be viewed as just that, a smart city:

“What makes the analogy between the smart city and the internal milieu of the smart body so instructive is that each of the components of the smart city must be carefully designed and integrated with other systems utilizing the most up-to-date technologies,” writes Dr. Jerome Lowenstein, a professor at the NYU School of Medicine. “One might consider cells, tissues, and organs as islands in the smart body, i.e., the whole organism.”

If you look a less evolved creature, one that relies on extracellular fluid to send signals throughout the body — maybe a jellyfish floating in the ocean — you can get a sense of a slow-moving old city. Lowenstein writes that “many components of the smart body require signals that travel much faster than the bulk flow and diffusion of extracellular fluid”; among those components are the brain and the retina.

Rather succinctly, Lowenstein puts it this way:

The parallels between the smart city and the smart body are impressive. It may simply be that the two systems have evolved independently, yet for some reason, possibly because they are effective, have evolved along parallel lines. Or, possibly in some way, not always obvious, the lessons learned during the long evolution of modern smart bodies is imprinted on the modern architects, builders, and city planners who have invented the smart city.

More like this
Innovation
8.5.2022 6:30 PM
This breakthrough stem-cell therapy could reverse genetic blindness
By Charles Q. Choi
Mind and Body
8.12.2022 5:12 PM
Who should get the monkeypox vaccine? Here's how to find out
By Katie MacBride
Mind and Body
8.12.2022 10:45 AM
Pig collagen helped restore eyesight in people who were blind — study
By Miriam Fauzia
Related Tags
Share: