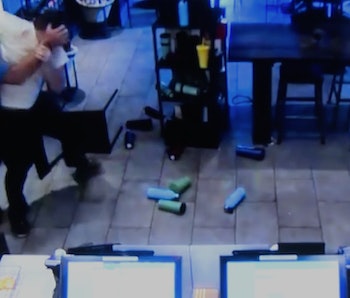 When Ryan Flores popped on a Transformers mask and pulled up to a Fresno Starbucks with a knife and a fake gun in order to rob it, he didn’t anticipate that the situation would transform into one where he got stabbed 17 times.

But that’s exactly what happened when Starbucks customer Cregg Jerri intervened in Flores’s robbery attempt, hitting Flores in the back with a chair and then wrestling the would-be bandit’s weapon away before turning it against him. Both men were apparently injured in the scuffle, with Jerri sustaining “a stab wound in the neck” but ultimately emerging victorious.

The entire incident was captured on video via security cameras, and quickly went viral. It isn’t extremely graphic but there is a brief blood spurt, so squeamish viewers should be advised:

Flores is facing charges for second-degree robbery and assault with a deadly weapon, reported SF Gate on Wednesday. He could have learned any number of lessons from this incident. But according to Flores’s family, his main takeaway from the incident was that Cregg Jerri needs to lawyer up because Flores wants to sue him for using “excessive force.”

“The guy, in my opinion, went from a Good Samaritan to a vigilante,” said Pam Chimienti, Flores’s mother in a television interview. “Stabbing somebody that many times, it doesn’t take that many stab wounds to get somebody to succumb to you.”

Flores himself has not expressly confirmed or denied the fact that he will file a lawsuit. He did, however, say in an interview with The Fresno Bee: “I don’t like to judge people, but that’s a lot of stab wounds.” Flores also noted his viral fame. “It was on Worldstarhiphop,” he said. “There are a lot of jokes.”

Fresno’s police chief, Jerry Dyer, completely dismissed the idea of Flores filing a successful lawsuit. “Now to say that Cregg Jerri’s going to be sued for intervening in an armed robbery and being stabbed in the neck? That’s ludicrous,” Dyer said.

Vigilante justice is murky territory — there’s a reason why vigilantes, from the fictional realm like Batman to real-life advocates of violence like antifa, are so controversial. But in this particular case, things seem to be pretty… cut and dry.