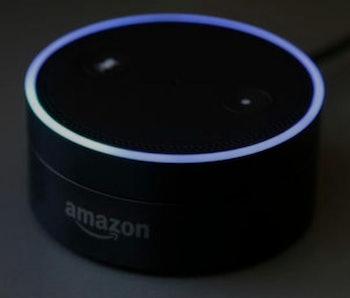 Worries that internet-connected devices can be used to spy on us aren’t unfounded. Wikileaks’ “Vault 7” dump of CIA documents in March of this year revealed that Samsung smart TV’s might be used to listen to people’s living room chatter. Another doc in the CIA leak indicated that the government could use Apple iOS (iPhone and iPad), and Android devices, to do the same. Apple’s said later it patched the bug.

All of which doesn’t make the video above, which hit the front page of reddit shortly after the the Vault 7 document dump, any less creepy.

In the video (again, above), a woman asks her Amazon Alexa-powered Echo Dot speaker if Alexa was connected to the CIA. It’s buggy, clammed-up response only increased speculation. While Amazon said the exchange in the above video was due to a “technical glitch” that has since been corrected.

We asked Alexa again a series of questions and while we didn’t get a straight-up “no” answer, when we asked, “Are you connected to the CIA?,” we did hear this reply: “Amazon takes privacy seriously. For more information, and to view Amazon privacy notice, visit the ‘Help’ section of your Alexa app.”

More like this
Innovation
7.30.2022 11:00 PM
Here’s exactly how tech companies and apps conspire to track you 24/7
By Peter Krapp and The Conversation
Innovation
8.5.2022 11:00 AM
Alexa could diagnose Alzheimer’s and other brain conditions — should it?
By Joanna Thompson
Innovation
7.29.2022 2:00 PM
Amazon's new invention could let you “speak” to the dead — but should it?
By Sofia Quaglia
Related Tags
Share: